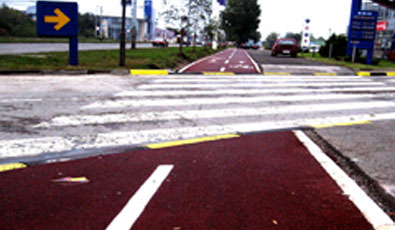 Municipality of New Belgrade has started in August 2007 a project for development of cycling tracks with the total length of 50 km.

Increase in number of cyclists in Belgrade indicates a need to analyze this way of transport. Why would more than 400.000 potential cyclists (according to some surveys) have only about 20 km of safe tracks at their disposal, while just a few more car drivers (about 500.000) use several hundreds more streets?

Municipality of New Belgrade has started in August 2007 together with Belgrade Land Development Public Agency a project for development of cycling tracks with the total length of 50 km. So far, sections of around 20 km in the New Belgrade streets have been implemented and ready for use.

Many car drivers would be interested in cycling if there are better equipped and arranged cycling tracks with higher safety level and if both all the participants in traffic - namely car drivers and pedestrians are more disciplined. There is a great number of persons who would commute by bicycles if there are bicycle storage places and shower and change rooms, beside arranged cycling tracks.

However, if a project of this importance has been better organized and studied possibilities for further cycling development in Belgrade would have been even greater. Namely, most of the users complaints concern small width of cycle tracks, i.e. inadequate size of paths for pedestrians and cycle tracks in comparison to the number of users. Although the structure of this space enables considerably smaller width of paths for pedestrians and requires greater width of cycle tracks, the latter are only 1m wide.