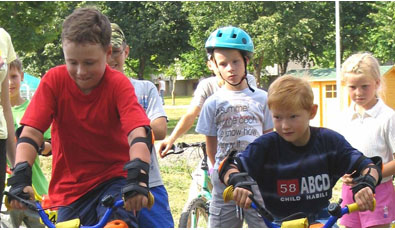 Siauliai initiated an innovative and positive Cycling School for children that gives free access to bicycles and encourages an active and healthy lifestyle.

Siauliai in Lithuania is traditionally named Bicycle City as they have the largest Bicycle Company in the Baltic States, Baltic Vairas. However, many children in Siauliai have difficulties in accessing bicycles and must learn to cycle on their own. Surveys in Siauliai also showed that people have negative views on cycling as a cool and popular means of transport. As part of the Baltic Sea Cycling project, “Bicycles Making Urban Areas Attractive and Sustainable”, Siauliai was able to begin an innovative and positive “Cycling to School” program for children. The project goal was to provide cycling opportunity for children who have no bicycles at home and to engage a larger number of children in the sport.

Siauliai focused on two areas of bicycle promotion for children. In their first activity the city established a cycling school with access to free bicycles for children to practise bicycling during a summer camp or in their leisure time. The cycling camp was free of charge and covered detailed informationon cycling, safety, lifestyle, and routes to school in a fun way .>The camp also staged several sporting events including competitions and excursions for the children. In the second part of the campaign the city worked to promote and encourage cycling as environmentally friendly transportation and as a part of a healthy lifestyle. The city organised a competition of drawings and writings among 7 primary schools to promote and build a positive view on cycling.

The cycling school took place at a park in the southern part of the city. 30 new bicycles were obtained and a 2-week summer cycling camp was organized. Siauliai’s summer cycling camp was a success with 60 children (age 7-17) participating. In a promotional campaign, students created 230 drawings and 50 writings about “Me and My Joyful Bicycle”. The best drawing and writing entry from each school was turned into a poster that included rules of safe behavior on the street. The posters were exhibited in the primary schools and in an exhibition organized by the city’s bike museum.

More information on the project can be found by visiting www.balticseacycling.com.