Cycling Promotion and Cycle Training for adults in Cork. Ireland 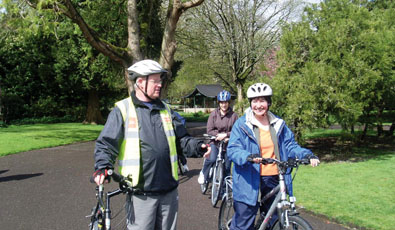 A result of a huge public consultation campaign for sustainable urban transport was that the citizens would like to use the bicycle more for their daily trips but have doubts regarding safety. Therefore the City of Cork implemented a bicycle promotion and cycle training program.

Based on a comprehensive public consultation with staff, students and visitors to three institutions (the University College Cork (UCC), the Cork Institute of Technology (CIT) and the Cork University Hospital (CUH), which together attract 7,000 employees, 25,000 students, and welcome several hundreds of visitors everyday), it became clear that many respondents would like to cycle and would consider this mode of transport as an alternative to the private car, but they had concerns about road safety and safe cycling in particular. Staff members in particular indicated that they had not cycled in a number of years and were not confident about negotiating junctions and roundabouts. The survey also indicated some willingness among students to change to cycling if given more information.

Staff:
Free professional cycle safety training was offered to employees of all three institutions during April 2010 and this was promoted through the websites and global emails of the institutions. Five sessions were held over a period of 3 days and approximately 40 people participated in total. Training was provided by the Cycle Safety Skills School, both for beginners and also for those who had cycled in the past but needed to brush up on their skills on negotiating traffic, signalling etc. Participants could bring their own bikes, helmets etc or CCC provided them if the participant required.
The training sessions were held at 2 cycle-friendly locations in the western suburbs i.e. Bishopstown GAA Club and Fitzgerald’s Park, where theory and practice of safe cycling were demonstrated in a controlled environment. This was followed by a session on the public road in order to put into practice what had been learned but this time in a “live” environment, albeit under the watchful eye of the trainer. Feedback was very positive and many of the cyclists indicted that they found the sessions very helpful and the training had given them the confidence to cycle more often (or in some cases for the first time!). As this venture was so successful, further cycle safety training days are planned.
Students:
Establishing sustainable travel patterns together with healthy living is very important for students before they are in a position to consider purchasing a car. A week-long promotion of Cycling for students was held at UCC as part of National Bike Week, the highlight of which was the UCC Pro Pedal Day on Thursday 27th May 2010 with various stands giving information about cycling to, in and around UCC and in Cork in general. It included the following:

Approximately 40 employees participated in the Cycle Training sessions. Considering that the number of people who cycle to work in Cork is currently approx 1%, this take up of the training was quite good. Some participants indicated that the training sessions were a good incentive and well-timed when considered in conjunction with purchasing a bike under the “Bike to Work” scheme, where employees get a discount of approximately 50% of the cost of a bicycle and accessories. This incentive, based on salary sacrifice and tax allowances, is currently being promoted by the institutions also. The events at UCC were very successful and well attended.
Obstacles and difficulties
Grouping individual participants according to their stated levels of ability, in order to group those with similar ability, proved quite difficult. The stated skills levels were not always correct! Participants also indicated that a series of training sessions, rather than a one-off, would prove positive.

Conclusions
The Cycle Safety Training sessions proved quite successful, not only in enhancing the cycling skills and confidence of participants but was also successful in heightening the awareness levels of participants of other cyclists on the road network. Participants felt this was helpful even if they chose to drive their car to work. The cycling promotion events at UCC served to raise student awareness of the benefits of cycling and further promotions will be organized for “Freshers” in September 2010.