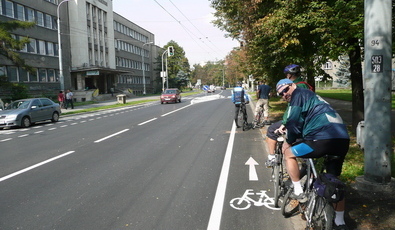 A substantial increase in private car traffic in Ostrava has exposed negative effects such as increased noise, emission and vibration. The city has therefore attempted to reduce traffic growth by offering alternative types of transport such as cycling. Up to the end of 2012, Ostrava increased the length of completed cycling paths to 206 km and those under construction to 4 km.

The City of Ostrava is the third largest city in the Czech Republic. It is located in the industrial region of Silesia, which extends between the Czech Republic and Poland. Ostrava has an area of 214 km² with a total of 23 districts and more than 330,000 inhabitants.

Cycling and related infrastructure in Ostrava began to develop significantly after 1989. Its growth was connected with the development of trade and services in the region and followed a global boom of cycling as a form of recreational activity.  Although bikes were also used to travel to work or recreation before 1989, in those days there were neither cycling paths nor marked or recommended cycling routes. In order to develop a cycling culture and to reconsider decisions, the BYPAD (Bicycle Policy Audit) project started work in Ostrava.

The first BYPAD audit was done in 2003. At that time, the city didn´t have a special bicycle policy but bicycle infrastructure was still growing every year. Therefore a survey about the bicycle policy in town was adopted, specifically before the bicycle tram commenced its operation.

The first independent paths for pedestrians and cyclists within BYPAD were created in Hrabová, Vítkovice and Kun?ice and in another project a complete route: Výškovice - Kun?ic.  Since the mid-nineties, annual funds have been released for the construction of continuous sections of cycling trails from city and district budgets.

In 2012, the Moravskoslezsko railroad was reconstructed along the river Odra. The district of Ostrava-South received a grant from the State Fund for Transport Infrastructure Maintenance for this project.

In reaction to safety problems, the city built humps in crossing areas of local roads and traffic lights. There is an annual inspection of quality and traffic signing of bicycle routes. The 32 city routes are marked consistently using a uniform system of letters A to Z; the newly constructed cycling lanes are mainly red, which will increase safety.

Ostrava also joined the Uherske hradiste charter that is committed to implementing measures to improve conditions for cyclists in cities. Since October 1, 2012 it is possible to register bikes at the Metropolitan Police at several locations along the cycling paths to prevent thefts. There also is an information site with several maps of the whole cycling network of the city, as well as 66 information panels located across the municipal districts.

Financing of the cycling infrastructure is organised in a central framework. In 2009, the city's budget for the development of cycling infrastructure investments was about 1.8M Euro with 44,000 Euro provided by SFDI. 200,000 Euro was pledged in 2010 from the EU regional operation programme to build connecting stretches to existing sections. New cycling paths were estimated to cost around 6.08M Euro in 2010.

More than 170 cities, regions and towns in 24 countries have already been convinced of the advantages of BYPAD and have started improving the quality of their cycling policy with simple, fast-working and above all cost-effective measures.

There is still much to be done in Ostrava as the cycling network is still not completed.  There are several gaps and other problems have also still to be resolved.  This prompted the city to carry out a survey about cycling culture which identified the following issues:

The city has decided to continue further development of cycling and to prepare respective financial support.