Cycling the globe: a sustainable mobility campaign for Danish schoolchildren 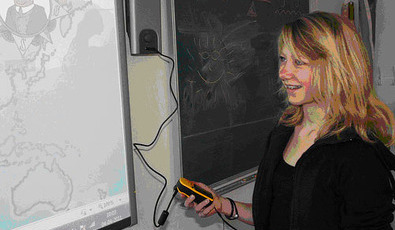 The Around the World in 80 Days” campaign targets 12-13 year-old school children. The idea is for the pupils to work together as a class to see whether they can ‘cycle’ around the world in 80 days.

Children are increasingly being transported on the back seat of their parents’ car instead of using more healthier and sustainable options including riding their bikes. The City of Aarhus, Aros Kommunikation and VEKSØ Mobility (all members of the Cycling Embassy of Denmark) have joined forces to change this trend using new technology and an 'old story'.

To achieve this pupils take turns at cycling with a GPS-unit, which registers the number of kilometers they cycle. Pupils can keep track of their progress on the campaign website and for every kilometer they cycle, a circumnavigator visualizes the children’s progress as they travel around the world. Every time the pupils pass one of the ‘sprint cities’, they receive a postcard with funny stories. This allows pupils to learn about different places, and the teachers can integrate it into the wider school curriculum.

They can also see how far other classes have cycled, as the different classes compete with each other to see who finishes first. This competitive element of the campaign helps keeps the pupils motivated, although, additionally they also have the chance to win prizes:

So far the campaign has run in the municipalities of Aarhus and Elsinore and is currently running in Fredericia.

Evaluations of the different campaigns show that overall about two-thirds of participating pupils cycled more during the campaign than usual, and that about 40% cycled on trips where they would normally have been transported in their parent’s cars.

Whilst the pupils do not actually make the cycling trips during school hours, participating teachers report that many pupils are cycling together out-of school hours, including long trips on the weekends- so in addition the increased health and sustainable benefits, they also benefit a lot on a social level.

The evaluations also highlighted the use of the GPS devices as a central and motivating factor.

The nature and design of the campaign makes it possible to reach a target group of potential cyclists that can often be difficult to reach and influence, and to keep their attention and motivation for a longer period of time.