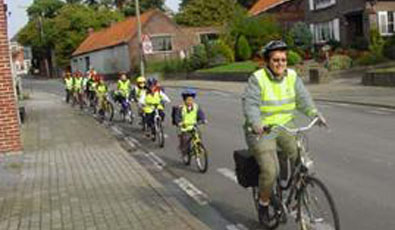 Because of their daily trips to school in the car, children have less experience in cycling in daily traffic, a part of their independency is lost as well. Bicycle pooling is an interesting and sustainable alternative. A bicycle pool is a small, clearly recognisable group of children that cycle along a known route under the guidance of an adult. Mobiel 21 vzw has been promoting the project ‘Cycle Train / Bicycle Pool’ since 2001.

The objective is to make children more experienced and independent in traffic. After four years Mobiel 21 wanted to measure the effect of bicycle pool campaign in Flanders (Belgium). This case study summarises the results of a written questionnaire and a random survey by telephone (190 schools were questioned).

The amount of active schools having bicycle pools is situated between 4.9 % and 11.6 %. The written questionnaire indicates that the number of children, bicycle groups and coaches of the pools maintains a stable level. The survey by telephone did indicate that bicycle pooling is a dynamic issue: while 11.6 % of the schools claimed to pool at the time of questioning, another 6.3 % reported to have stopped the project at a certain moment.

More than 80 % of the Flemish schools know the concept of bicycle pooling. Mostly, schools claim a lack of interest by parents or school-boards as a reason for non-participating. The survey by telephone learned that 2.6 % of the schools had concrete plans for a bicycle pool in the future, 7.4 % considered to (re-)start the project.

A little more than half of the schools (51%) that have a cycling train project are pooling throughout the year. Another 28.5 % of the schools reports to pool during specific periods of the year. Mostly, in these schools, the Bicycle Pools are active in September-October (fall) and April-May-June (spring), taking a winter-break in-between.>The school-board (81.9 %) and parents’ committee (71.4 %) are often involved in the project; also city counsels (30.5 %) and police forces (38.1 %) are active.

Most of the children wear reflecting clothing (77 %) and a helmet (64 %). Other attributes like ribbons or flags are seldom used. Because of the dynamic character of Bicycle Pooling it is important for the continuation of the project to find motivated coaches to accompany children outside their own family to school. Some parents do not want to take the responsibility because of the danger in traffic. On the other hand, the coaches note that children who pool, become sooner independent in cycling to school. Several schools indicate positive experiences between participants.

The fact that 80% of the schools in Flanders know about Bicycle Pooling and 10% had plans for (re-)starting a pool-project is satisfying. It means that the project has high chances for extension.

A more extended Dutch version of the inventory results is available at www.mobiel21.be.

The website www.fietspoolen.be (in Dutch) was launched for regional dissemination.