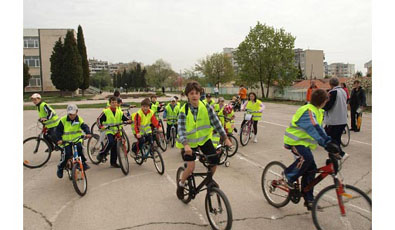 As part of the ADDED VALUE project a promotional campaign was implemented to promote a newly constructed cycle path in Varna, Bulgaria. The wider campaign involved cycle training and competitions for children. More than 2 000 children directly took part in the initiative, and a further 10 000 students and adults were indirectly involved, receiving information about the benefits of cycling. Following the initiative, attitudes of participating children towards sustainable transport and cycling use changed from 37 to 59 per cent.
Context
Despite one in five Bulgarians (over 1.5 million people) owning a bicycle, few cycle day-to-day. Varna, a medium-sized port city with over 300 000 inhabitants is a largely compact city characterized by low topology and is thus ideally suited for cycling. However, despite the road network been almost 1 000km, only about 5km of cycling paths are currently available, many of them are quite narrow and parking on them is not strictly controlled. The main aim of this initiative was to target young people (and the general public) to use the cycle paths and encourage them, and equip them with the necessary skills to cycle more often.
In action