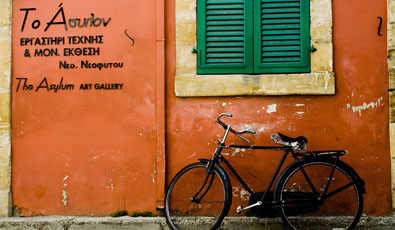 The “Cycle Networks in Cyprus Towns” project was an initiative to make practical changes to road networks in four Cyprus cities (Nicosia, Limassol, Larnaca and Paphos) that would create the necessary infrastructure to encourage cycling and alternative means of transportation. Rather than make costly and unrealistic changes in urban planning, it sought to take a more integrative approach. The project contained extensive background research, a targeted media campaign, the preparation of a technical handbook and the creation of pilot cycle networks.

Since the end of World War II, Cyprus has been characterized by rapid urbanization and poor urban planning. One of the areas most affected by the resulting situation is urban transport, which has seen a tremendous increase in the use of private vehicles and limited use of either public transport or alternative means of transportation. It is not hard to imagine then, that Cyprus, like many other European countries is struggling with urban traffic congestion, pollution and questions of how to improve existing road networks. One cost-effective solution is to create an enabling environment for the use of sustainable modes of transportation by integrating cycling networks into the existing road system and gradually making alternative means of transportation part of the overall sustainable development framework . In 1997 the Town Planning and Housing Department of Cyprus received €97, 600, with the EC contributing 86% of this budget, to design and build comprehensive bicycle networks in four Cyprus cities. The project encompassed the Nicosia, Limassol, Larnaca and Paphos municipalities. The main objective was to promote cycling by integrating cycling lanes and sidewalks into existing road infrastructure and into municipal master plans. Through this project, the four municipalities hoped to encourage the public to make cycling part of their daily activity.>

The project managers in the Town Planning and Housing Department spent much of their time and budget building a strong foundation on which to build support for cycling from both the communities involved and from local government. This included making evaluations and integrating cycle networks into existing local plans and conducting pilot demonstrations for all four municipalities. Two public opinion surveys titled “The Attitudes of Cypriots toward Bicycle use” were conducted in two year intervals. Eight cycling events and a media campaign that involved newspaper coverage on the project and 15 television and radio ads were organized to generate the necessary public awareness to make the project a success.

There were many notable successes with this project. Major outcomes include a technical handbook on how to design bicycle infrastructure and a study on the legal constraints of introducing bicycle facilities in Cyprus titled “Research on the legal aspects as regards the movement of bicycles on roads in Cyprus”. However, at the conclusion of the project only one of the four proposed pilot cycle networks was actually implemented; though local authorities gave their assurances that the other pilot projects would be funded later with other funds. Regarding achievements of the project objectives, the second public opinion survey suggested that greater awareness about cycling and its benefits had been achieved in the four municipalities; however, the small sample size of the survey, about 1000 respondents, weakens the significance of its results. Most importantly, the topographical surveys and environmental assessments for proposed pilot cycle tracks in Paphos and Nicosia were widely distributed among relevant stakeholders, an information sharing activity that could help promote cycling in Cyprus well beyond this project.
Topic:
Walking and cycling
Archive
Country:
Cyprus
City:
Nicosia
Contact:
Yiannos Papadopoulos
Author:
Nyambura Njagi
Keywords: