“Cycle for kilometres. park in an atmospheric place” – cycling action in Poland 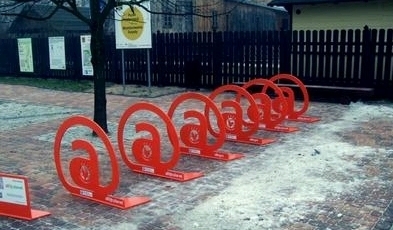 In 2012 a campaign took place for the third time in Poland, encouraging cyclists to propose new bicycle rack locations. In addition, the cyclists have created a national database of interesting cycling routes.

One of the main problems for cyclists in Poland is the lack of bike racks, and the fact that existing ones are impractical or located in the wrong places.  The Allegro All For Planet foundation (AFP) has been trying over recent years to make urban spaces more cycling-friendly. For this purpose a nationwide public campaign was launched in 2010 and took place for the third time in 2012.

The action “Cycle for kilometres, park in an atmospheric/pleasant place” is a competition for both individual participants and state provinces. The participants collected cycled kilometres either through an online application (on the website), or directly using their own bike equipment. For this purpose, a mobile application has been designed (for iOS and Android operating systems), which counts the distance cycled based on GPS signals. At least 10 kilometres are needed to participate in the competition. This application also allows participants to identify sites for new bicycle racks and add cycling routes to a database.

By using this application, participants can set new routes and recommend them to friends. All they need to do is to get on their bike and ride, while the application saves the GPS signal trace on a map. They can then publish it on the website (www.zaparkujklimatycznie.pl) owned by AFP.

Participants were encouraged to take part in the campaign with prizes, including 100 bicycles. In conjunction, their mileage is also added to a survey of the participants' home regions. The regions that have collected the highest number of kilometres, received the most bicycle racks.

During the campaign, participants indicated sites and specific locations where bicycle racks were most needed.  Based on this information, the foundation chose the most relevant sites and took care of the formalities required to install new bicycle racks.>The cost of each bike stand was on average €250, half of which was paid for by AFP and the other half by an investor. Costs include the design, manufacturing, transport, installation and coordination process. Maintenance of bike racks (such as painting, repairs etc.) is based on the same 50/50 principle. Stands are owned by the foundation, who also pay for insurance.

The bicycle stands are original designer racks, created by young artists so that their shape always makes reference to their location.  In some Polish cities, bikes are parked in racks in the form of a sunbather on the beach (the city of Sopot), a kangaroo and elephant (the city of Poznan) or the Dragon of Wawel Hill (Kracow).

Participants of the scheme have already riden a total of 80,000 kilometres. As a result more than 685 new racks and 1,170 parking spaces for cyclists at 77 locations in 7 major cities were installed up to 2012. Based on the cyclists’ recommendations, more than 1,000 new bicycle routes have been identified.

The campaign was promoted on the Internet and in the media, but also with the use of flyers. Additionally 1,000 white bike seat covers with the action logo where produced as a gift for the parked bicycles and their owners.

Further aspects of the campaign included:
- enhancing of social integration of cyclists in various cities;
- support for the idea of sustainable transport;
- increase in popularity of the bicycle as an environmentally friendly means of transport; and last but not least -
- stimulation of public discussion related to bicycles in the city.