Cycle Fashion as an Agent of Change: One Company's Story 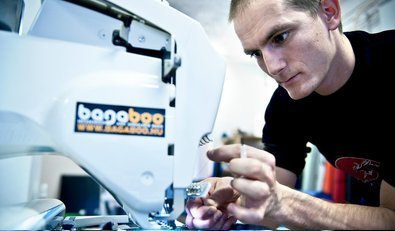 Budapest’s Bagaboo bike bag company typifies a small but growing local industry centered on cycling fashion. Not only has it given a modest livelihood to a small group of people, it also contributes to an emerging culture of green commerce and sustainable mobility, particularly among young, fashion-conscious people.

In Budapest, a cottage industry of cycling fashion has blossomed in recent years, one of the fruits of the local cycling and Critical Mass movement. It includes makers of clothing, accessories and small-production boutique bicycles. These businesses help drive an emerging DIY movement concerned with sustainable, local production; buy-local shopping and, of course, environmentally friendly mobility.

The small bike-bag maker Bagaboo typifies the movement. Local bicycle courier Tamás T?hegyi started the company in 2006 at the age of 25 because he wanted a new bag. The difficulty was that the only manufacturer in Hungary at the time took too long to fill orders. T?hegyi decided to make a bag himself on a home sewing machine with the help of his mother, a seamstress. The problem was solved and the idea for a new home enterprise was born.

With T?hegyi’s sister handling emails and invoices, the family developed a small manufacturing business specialising in durable, customisable bags that match the quality of established international brands while having the cost advantages of a Central European base. Initially, the company plied the Hungarian market, advertising on the Internet and through T?hegyi’s social connections in the bike-messenger community. In time, he translated the website into English and began selling bags abroad, mainly in Japan, Germany and the UK, and recently in the Netherlands.

The business now has a rented production space in a local industrial park and six hired sewers now contribute to production. T?hegyi doesn’t say what current production is, but in a 2008 article, he indicated that his company was making approximately 100 bags per month, with each sewer turning out approximately one bag every three hours.

Bagaboo maintains a highly visible presence in the Budapest cycling community. Along with fellow Hungarian bag makers such as Bringa Bag and Lupusbag, Bagaboo highlights its products regularly at bicycle fashion shows in the capital city. These events provide a stage where local artisans can show their wares in an entertaining, social atmosphere. Bike fashion shows have been held alongside Budapest's very popular Critical Mass rides and during closing parties for the national bike-to-work contest. The fashion shows are always a simpatico blend of social activism and commerce.

Alongside other local businesses, Bagaboo has a partnership with the Hungarian Cyclists Club, having an icon on the organisation’s homepage and an ongoing promotion in which club members can buy Bagaboo products at a discount.

Despite evidence to the contrary, though, T?hegyi gives a modest assessment of the industry’s role in popularising urban cycling. Having volunteered as an escort for one of Budapest’s first Critical Masses in the mid-aughts, T?hegyi still believes that this twice-annual demonstration is the main driver of the local urban cycling movement. Other actors in the community, including Bagaboo, contribute relatively minor roles, he said.