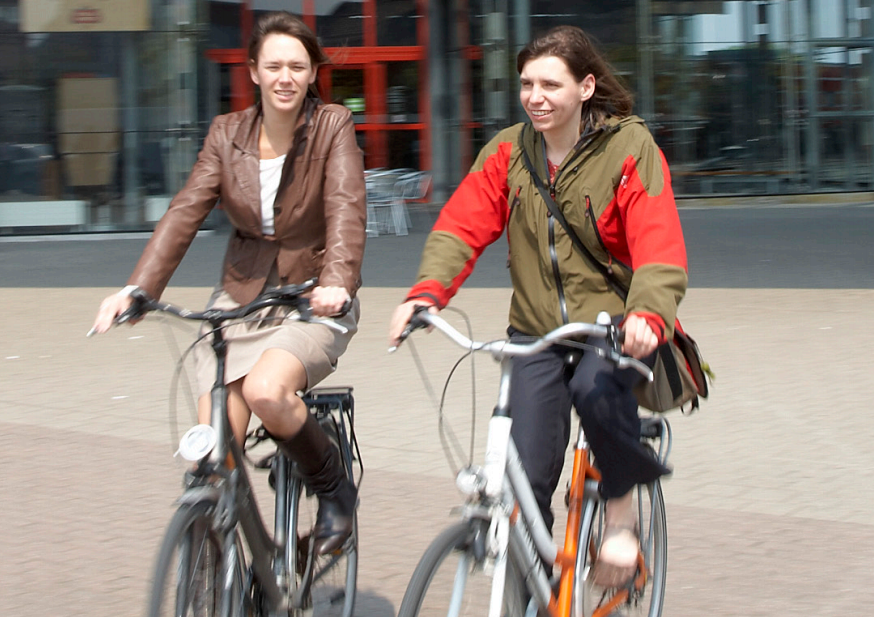 The Colruyt supermarket chain has been working for several years to promote more eco-friendly commuting for its employees, offering a range of sustainable commuting alternatives. In 2011 more than 3 000 of its employees participated in various company schemes, cutting the distance travelled by their cars by more than 9 million km a year.
Context
Colruyt is a big Belgian family retailer company that owns a number of brands, most notably a discount supermarket chain which has over 200 outlets throughout Belgium. The company’s headquarters are in Halle and has operations in Belgium, France, Luxembourg and the Netherlands. With over 20 000 employees, the company states it has a social responsibility to contribute to a smoother, safer and more ecological commuting. This involves promoting cycling and public transport and, to those who drive, encouraging eco-driving.
In action
Bike to Work
In May 2007 Colruyt initiated the Bike to Work project, a very successful initiative resulting in more than 2 000 employees now cycling to work. The project received co-financing support from the Flemish Government's Pendelfonds (Shuttle Fund), which aims to ‘smoothen’ commuting. To manage the scheme, Colruyt employed a mobility co-ordinator. Participants must commit to cycling to work at least four out of five days. In return they receive a bicycle allowance, a new bicycle, bicycle equipment and ‘improved’ cycling conditions. The participants cycle more than 3.7 million km a year combined - an equivalent reduction in CO2 emissions (assuming they were car drivers) of 576 tons.
Bike from the station
Bike to Work is in fact a sequel to Colruyt's rail commuter project, Bike from the Station, which started almost 10 years before. Several hundred Colruyt bicycles are available for employees to cycle from the Halle, Kessel-Lo and Deinze train stations to the Colruyt headquarters or regional offices. In total, this means that employees travelled 3.1 million fewer km by car a year.
Trains and carpooling
Since November 2010 Colruyt employees have the opportunity to travel to/from work by train at zero cost. Colruyt takes on 80 per cent of the train-fare costs and the government supplements the remaining 20 per cent.  Colruyt also hosts an internal carpool database, which help its employees search for 'matching' colleagues who can share cars. In total, this means that employees cut the distance travelled by their cars by 2.3 million km a year.
Results

Thanks to Colruyt, 2 120 employees cycle to work; 235 cycle from the station to work; and 730 are involved in the carpooling scheme. In total the 3 085 employees who participate in the various travel schemes have stopped journeys by car that would have amounted to 9.26 million km - saving 1 368 tons of CO2 emissions and reducing congestion.