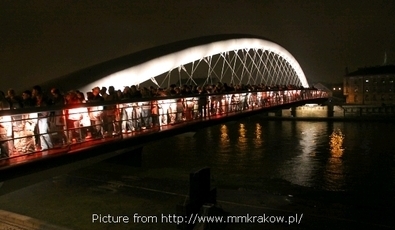 In September 2010 a new footbridge was opened in Krakow’s famous district - Kazimierz. This has greatly increased convenience for cyclists and people with disabilities and also represents a prominent symbol of the city of Krakow, with a positive effect on the development of neighbouring districts.

For many years, Krakow’s Kazimierz has been a favorite place for socialising and one of the most popular sightseeing places for tourists wishing to explore modern city attractions. Together with the district of Podgórze, located on the opposite side of the river Vistula, the Kazimierz was characterized by difficult access especially for people with disabilities and cyclists.

In order to get there, both groups were forced to use one of two neighbouring bridges: the “Powstancow Slaskich” or the “Pilsudski” bridge to cross the river. For cyclists both bridges created an additional risk due to their significant traffic flow causing a large number of accidents involving cyclists in the past. At the same time, the disabled had to rely on their own cars or public transport to cross the river.

Another problem was the need for regeneration of the Podgórze district on the other side of the river, as it was hardly visited by tourists and had a bad reputation among the inhabitants of Kracow.

Investment included the construction of a 130 metre long bridge for pedestrians and cyclists, consisting of two 3 metre wide parallel routes.  In this way pedestrians were completely separated from cyclists, which has improved safety for both groups. Both ends of the bridge have been adapted to the needs of wheelchair users by building gently sloping ramps directly from the pavements.

The footbridge has no vertical supports in the river bed. The main load-bearing element is a thick arched steel tube, 1220 mm in diameter, 143 metres long and filled with reinforced B-30 type concrete.>The tube supports two reinforced concrete bridges with steel ropes of 40 mm diameter. The whole structure weighs more than 700 tons. At night the bridge is illuminated with a dynamic LED lighting system.

The new footbridge, dedicated to Father Laetus Bernatek (pl. “K?adka Bernatka”) has considerably changed the lives of Kazimierz and Podgórze, the two districts at both ends. First of all, the number of tourists has increased and many of them have taken over the revived district of Podgórze - in a formerly deserted area many pubs, restaurants and souvenir shops have now appeared. The lighting installed in the area has contributed to a sense of security with the number of recorded crimes in the area falling by about 40%.

The footbridge has also become a start point of a new tourist route, creating a new short cut and, thus, contributing to a significant decline in cycling on the neighbouring bridges.  It is estimated that the “Pilsudski” bridge has recently been used by one third less cyclists than two years ago. This is confirmed by the decreasing number of accidents involving cyclists on the bridge.

With its unique architectural form, selected in a competition where cost was not the deciding factor, the footbridge ideally blends with the landscape; it has also enriched the quality of development and land planning of areas nearby. In 2011, the footbridge achieved first place in a competition for the most interesting architectural form of bridges and the best illuminated object.