Creative Competition and Mobile Exhibition on Public Transport by children in _ilina. Slovakia 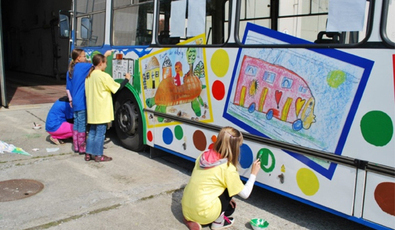 The municipality of _ilina held a creative competition for primary school children, dedicated to the theme “My dream public transport”. The children’s art works were displayed in municipal premises as well as on public transport vehicles.

This activity was implemented within the framework of the BENEFIT project, as part of the Intelligent Energy Europe programme. Many changes and trends in society have had a marked influence on the supply and use of public transport in _ilina in recent decades. The opportunity for individual mobility afforded by the passenger car has challenged public transport. Despite the implementation of regulatory measures, it is expected that there will be an increase in individual vehicle transport use in city in the coming decades.
The objective of this activity was to improve the image of public transport by introducing an interesting and unusual promotional activity. The city wanted to use children’s talent to convey the message that public transport is a safe and comfortable way of travelling in the city. Given children’s and young people’s reliance on public transport, it is essential to involve them in decisions concerning this important issue.

The activity started in September 2009 with the announcement of the competition at primary schools and its promotion via posters. The participants submitted their individual projects dedicated to the theme “My dream public transport”. Art works were collected until January 2010. The jury evaluated the children’s works in February. The best works were put on display in municipality premises as well as on public transport vehicles.>All participants of the competition were awarded with small gifts, with winners receiving valuable prizes. Winners in three age categories had the extraordinary opportunity to cover a real trolleybus with their paintings in September 2010, during the open day in the public transport operator yard. The decorated vehicle has been operating around the city to support a more positive attitude towards public transport.
Personal and implementation costs were about €2,200. About 180 person hours were spent on this action.

What is needed to discourage the use of cars and promote the use of public transport? Municipalities and public transport providers and operators should be committed to programmes that promote and develop public transport services. In bus or other public transport vehicle advertising, the vehicle is a medium commonly used by advertisers to reach the public with their message. This usually takes the form of promoting commercial brands, but it can also be used for public campaign messages, as was the case in this activity. The decorated trolleybus has certainly drawn a decent amount of attention from the public while travelling on the road. The purpose of the activity was also to increase public awareness, especially that of children, regarding environmental issues.
17 elementary schools participated in the competition and 289 artworks were entered. The activity was very successful. The relatively simple application and low costs mean there is huge potential for the replication of the activity in any city. Artworks were also used in the design of many promotional materials.