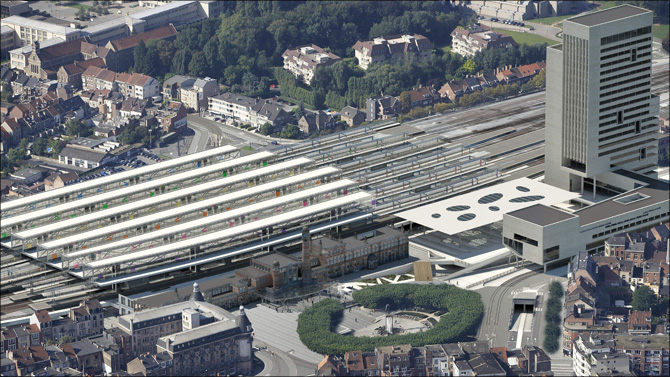 Ghent-Sint-Pieters is a 100-year-old train station with 50 000 daily visitors. Because of an increase in the number of people using the station, it is being remodelled into a modern multimodal hub where travellers can comfortably and efficiently transfer to train, bus, tram or bicycle. The changes include a renewed station, an integrated tram and bus station, indoor bicycle parking for over 10 000 bicycles and underground parking.

The city of Ghent is situated in the province of Flanders and has approximately 250 000 inhabitants. The Ghent-Sint-Pieters station is situated at the crossroads of two important train connections: one connecting Lille (France) to Antwerp and one connecting the Belgian coast to Brussels.

The project to modernise the train station involves several partners: NMBS and Infrabel (railway companies); Eurostation (the project supervisor);  De Lijn (public transport operator; the city of Ghent; and the Flemish government. These partners together invested approx. €  500m. Private partners are commissioned to execute the project.

The construction work started in 2007 and will continue until 2024. During the construction period the station will be kept in operation. Whenever a part is finished it will immediately become operational. The following works are being carried out to remodel the station:

A first part of the covered bicycle parking has been finished providing free parking for almost 2 400 bikes and the first two underground pick-up and drop-off points (Kiss and Ride) are in use. It is expected that within the upcoming five years, five tracks will be completed. During the process, communication will take place with the people via an infopoint, meetings, stakeholder involvement, newsletters, the website and Facebook.

Visitors, commuters and residents have been very positive regarding the new developments and they have approved the changes. The first building has been finished and the civil servants from the Flemish government, who are working in this building, are very positive about the location and the building itself. The participation projects have also shown positive results: people are willing to invest time and ideas into the development of the site.

As the modernisation is a highly complex task, it was difficult to provide a detailed advance schedule. Combined with the fact that the station needed to remain in operation, this has extended the completion date from 2020 to 2024. One of the main challenges was organising traffic flow as commuters, residents, public transport and construction traffic need to use the station. This problem was tackled by having bi-weekly meetings called ‘Minder Hinder’ (reducing nuisance) where signalling, changes and traffic consequences are discussed.

The main objectives of the working group, which includes all partners and Ghent’s mobility department,  are the prevention of problems, adaption of signals and a fast reaction to complaints. An infopoint is also available to communicate new measures and to publish new maps for different users (cyclists, pedestrians and drivers). One of the most important parts of the project is stakeholder involvement and communication. Some of the residents opposed to the development of the project and due to judicial actions the construction was delayed.

The project may well be transferred to other countries and cities, but it has to be kept in mind that the realisation of similar projects requires several partners and a long preparation time. Early and continuous communication is vital and public participation is necessary to make the project acceptable to commuters and residents. The partners are able to collect the concerns of the people via participative actions. Through personal contact meetings, problems can be discussed and solved. There are also initiatives where the residents can help design the squares and the park which are being created as part of the regeneration.