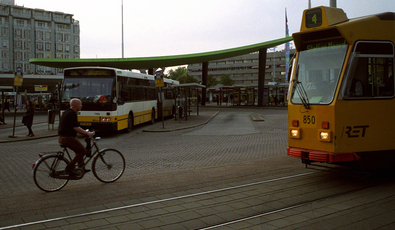 The four biggest cities in Norway were analysed for the welfare implications of alternative urban transport funding schemes. Four reports were compiled to find the best way of financing public transport in urban areas.

One of the main challenges for public transport in larger cities is to ensure stable and sufficient revenue flows. An optimal level of service within the public transport system typically presupposes revenue from more sources than the passengers alone. Important funding solutions in the current Norwegian model include public transfers in the form of state and country grants, user fees and government grant schemes. The study of national experience shows that if the goals set for public transport are to be reached, the current level of funding is insufficient. Funding may take the form of lump sum subsidies, output-based subsidies, or designated contributions from toll rings or road pricing schemes. To obtain political acceptance for such funding arrangements, the different funding options must be presented as a whole.

The Norwegian Ministry of Transport and Communications administers a research programme to finance projects which improve the basis for work with national and local transport policy. For many years discussions have been held about the best way of financing public transport in urban areas, and what service level should be provided.

The main objective of the project was to analyse the welfare implications of alternative urban transport funding schemes in the four largest cities in Norway: Oslo, Bergen, Trondheim and Stavanger. Three alternative funding models were analysed and various funding parts put together. Funding schemes in the models are partly based on feedback from informants on the current Norwegian model and partly on review of international forms of finance. Efforts were made to balance the weaknesses of one measure with the strengths of another.

1. A description of the decision-making processes behind the different transport policy packages in the four largest Norwegian cities, assessing the extent to which the approach taken in each package is a result of the way in which it has been organised.

2. A study of the preferences of politicians and decision makers regarding different funding packages for the four cities. For example, the three alternative funding models were called “The State Model”, “The Local Model” and “The Project Model”.

I. In the state model, funding for public transport is defined as a state responsibility. The state has responsibility for ensuring adequate and sustained funding.
It could include:

II. The local model maintains the system of public transport as a local or regional concern. As a consequence, local authorities’ ability to obtain funding is strengthened. There is a split responsibility between county and municipality in each city. Schemes include:

III. In the project model there is no change in responsibilities but the focus lies on the organisation and funding of projects. The idea is to ensure the implementation of a project by an institutional apparatus. Schemes include:

This is intended to make it easier for counties to use PPP as a model for public transport projects.

3. A study of framework conditions and development trends for the funding of public transport in these cities.

4. A study on how an economically optimal public transport service can be developed.

One of the main conclusions from the study is that the urban environment, like housing density, parking restrictions or road user charging, will play an important role as a funding element for urban public transport. Different cities have different challenges and opportunities in the design of public transport. However, 'road pricing' will have a mixed effect; the subsidy demand will increase by €7.3 million in the short-term and the optimum level will decrease by €24 million in the long-term.

The former described four reports were compiled in this project.