Conversion of conventional buses to trolley buses in Gdynia (Poland) 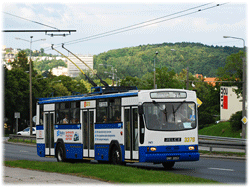 Gdynia, population 247,000, a city in the north part of Poland is one of three polish cities, having a trolley-network. The trolley-bus network in Gdynia exists since 1943, currently it comprises 96 kilometres and 14 lines with 86 trolley-buses in total. Those 86 trolley-buses make up about 30% of all buses in the city, covering the distance of 4 million kilometres and transporting about 350 million passengers yearly.

However, public transport users had become less and less satisfied with the quality of the vehicles as their technical standard fell behind that of the city's regular buses. Whereas the conventional buses were 100% low-floor access, just 9% of trolleybuses met this standard.

The need to modernise the fleet became more and more obvious but within a tight budget.

According to modernisation’s policy the company regularly purchases new vehicles, first of all products of the polish manufacturer Solaris. Besides that it desided to convert used conventional Mercedes-Benz O405N buses by installing drive trains from retired Jelcz trolley-buses.

In principle, Jelcz buses are basis of the fleet of the trolley-transportation company in Gdynia. In 2004 due to financial restrictions the company found, that it is more efficient to buy and retrofit used Mercedes than to overhaul old Jelcz, a bus type which was manufactured in Poland within many decades.

So far 30 MB buses (O405N2E and O405N2I) have been retrofitted to low floor trolley-buses in the garage of the company and started to operate in the city. Main advantage of the buses compared to Jelcz buses is the low floor level.

Due to the very good technical state of used Mercedes buses bought from municipalities and transport companies in Germany, overhauling of the MB buses requires only thorough cleaning and painting but no repair. Main change in the construction of the MB buses while retrofitting them to trolley-buses was the strengthening of the roof structure, where the pantograph is installed.

In comparison, the major overhaul of Jelcz buses includes replacement of the body shell. It turned out that a bus used for 10 years in Germany has similar wear and tear as a 3-4 years old Jelcz, operated in Poland.

The construction of Trolley-buses based on MB takes about 4 months. More time was spent for the retrofitting of the first MB trolley-bus, due to projecting and completing the formalities (mainly the certificate for electric equipment).

Major changes in vehicle construction and resulting disadvantages for durability and certification process could be avoided. The maintenance team of the transportation company appreciates high quality of the body and chassis of MB O405 buses.

Through its long experience, Gdynia developed a conversion process that's optimal technically and financially. It has compiled its lessons learned in to a guidebook, "Conversion of a Diesel Engine Bus into a Trolleybus," published in Polish and English. It was planned to be posted for download on the website of the EU-funded project TROLLEY (www.trolley.eu).

Gdynia believes the trolleybus has a bright future in urban transport, especially considering the rising costs of fossil fuel and growing concern over city air quality. The converted trolleybuses now plying the streets of Gdynia and neighbouring Sopot are energy efficient, elegant and comfortable.

Conversion is an attractive approach to fleet modernisation, particularly to many Central and Eastern European city that have large trolleybus fleets and strained municipal budgets.

More pictures are available at:
www.pktgdynia.pl