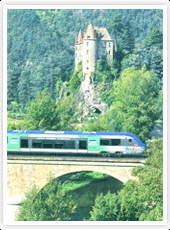 Combining train and hiking paths along the river Loire meets not only the objective of tourist ecomobility around the Gorges de la Loire, but it also enhances the image of this destination.

The regional train of Auvergne and some hike paths run along the preserved banks of the river Loire. The Local Committee for Hiking of Haute-Loire and the National Federation of Hiking have been, since 2000, working on redesigning the hiking trails so that they are closer to the 8 local train stations. The idea was to encourage hikers to reach the starting point of their hikes without using their cars. Ultimately the goal was to establish a route on which people could hike from one station to another in one afternoon, with the total route taking 8 or 9 days. This constitutes a length of 196 kms: 86 kms on the right bank of the river, 84 kms on its left bank, with the addition of the footpaths leading up to the various stations. In the long term, an additional objective of the project is to increase the occupancy of local accommodation facilities, not only through local visitors, but also with the arrival of tourists from more distant places.

In order to implement the project, the Local Committee for Hiking cooperated with other organisations: five communities of joined municipalities, the Urban Community of Le Puy en Velay, local authorities of Haute Loire, and the “Etablissement Public Loire”. The work started in 2000 by re-designing the pedestrian paths and establishing where the gaps where. A detailed cadastral study was led by the Local Committee for Hiking, in order to avoid the trails crossing private land. This was followed by approval requests for the trails, which had to comply with the French Hiking Federation’s criteria.>In 2005, marking out work was done, mainly by volunteers. Some service providers, mostly catering and accommodation facilities have become partners with the Local Committee for Hiking. This partnership allows the Committee to cater for those marking out the paths and also to promote registered hiking trails. Service providers are named “Fellow travellers” and are easily identified thanks to a sticker on their establishments. In 2008, the Local Committee for Hiking and the French Federation of Hiking published a “topo-guide” ® that gives hikers a range of 200kms of marked trails in the gorges of the Loire, passing by the stations located in the gorges.

In the stations, a sign indicates the hiking trails, directly guiding hikers to the beginning of the trail. The hikes can be done by anyone, as people can choose to walk on one of the banks, straight from one station to the other.
The significant increase in hiking in the gorges of the Loire is evidenced by service providers and the Tourist Information Centres of the area. The project meets not only the objective of tourist ecomobility around the Gorges de la Loire, but it also enhances the image of this destination. It also seems to contribute to the increase in patronage of the line TER Auvergne Saint Etienne - Le Puy-en-Velay, and contributes to tourism development in the region.
This project represents a total of 6 years’ work, a large part of which was made possible through the active involvement of volunteers who worked for a total of 4600 hours. The 2008 TopoGuide is a success, 350 copies are sold each year. It is a good tourist product that can inspire many other territories.