CNG buses in Bratislava. the capital city of Slovakia 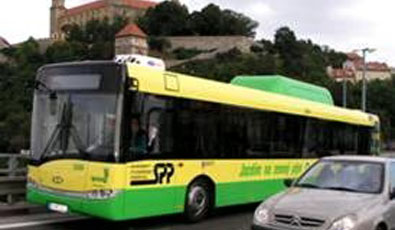 In present time the public transport company operates approximately 450 buses of different types on 62 lines with an operating length of 385,5 km. The number of full low-floor buses is 45 and average age of the vehicles is approximately 12 years. Bus types of Solaris, SOR BN 9.5 (so-called midibus), Ikarus, Tambus, Karosa and Mercedes run on Bratislava roads, which transport 150 million passengers per year.

The current tasks are the modernisation of the bus fleet in combination with an environmental-friendly justification of the enterprise. The first project is the substitution of conventional buses by CNG buses.

Today 162 CNG (Compressed Natural Gas) buses run on Bratislavas streets, representing 36 % of the total bus fleet. The first CNG buses appeared in 2001, whereupon it related to buses of the type Karosa, which were reconstructed to drive on CNG after their modernisation.
Today the Bratislava transport company operates 140 buses of this type . In addition 22 new barrier-free CNG buses of the type SOLARIS URBINO 15 are operated since 2006.

Details of the CNG buses:

On the base of experience of the Public Transport Company Bratislava by using CNG buses transport costs can be reduced by 33.6 % . Fuel costs of CNG powered buses are approximately 8 SKK/km (0.25EUR/km), while diesel powered buses run costs of about 12 SKK/km (0.36EUR/km).

CNG buses do not emit particulate matter and do not smell, generate 60 % - 80 % less gaseous emissions (including methane) than diesel buses. They are one-third quieter, run more smoothly without vibrations and have longer operating life. The following comparison of emissions from one bus running on average for 3600 hours/year evidences environmental benefit of using CNG buses.

Plans for the future

The public transport company plans to operate 300 CNG buses in Bratislava streets in 2010 , which would represent 75 % of all buses in passengers transport per day.

More information about the public town transport in the capital city of Slovakia, as well as in other cities you can find at the imhd-website.