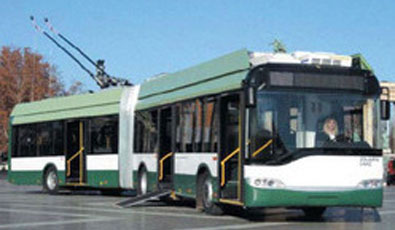 With the support of MIRACLES a programme was designed to speed up the renewal of the PT fleet. Between 2002-2003, 1,107 EURO 3 buses were purchased, 300 of which are equipped with the CRT system, to achieve EURO 4 standards. Furthermore 30 new generation, bi-modal trolley buses have been introduced, following tests carried out by ATAC in Hungary.

Rome has a surface PT network of over 3.500 km served by 339 lines, and operated with almost 2.500 buses.The LTZ (Limited Traffic Zone) covers a surface of 5,2 km2 compared to the 1.300 km2 of the whole Municipality. This area, which covers the main cultural heritage of Rome, is the core of the Municipality policy to reduce traffic pollution.The measure was based on the renewal of the bus fleet, which involved the purchase of 908 Euro III buses, 200 EURO III CRT buses, 30 “new generation” bi-modal trolleybuses.

With the support of MIRACLES an important plan has been designed and performed by ATAC (Rome PT Agency) in order to speed up the renewal of the traditional bus fleet mainly composed, at the beginning of the Project, by old and pollutant buses (EURO 0), not yet compliant with the European emission standards in force. After a supply of 1.107 EURO III buses, performed in 2002 the last set of buses purchase has been carried out during the year 2003: the requirements for 300 buses (200 urban 100 sub-urban) MERCEDES CITARO were more “demanding” then in the past purchases: although EURO III compliant the emissions levels required had to be lower than the EURO III standards. They are equipped with the CRT system, a trap for PM 10 which is the most important traffic pollutant in Rome.>The CRT (Continuous Regenerating Trap) allows buses to have a significant reduction in the overall emission levels, such to perform the EURO IV standards.• “New generation” bi-modal trolleys have been introduced after tests carried out by ATAC in Hungary. The tests have been completed and the first six trolleys have been moved to Rome in the new depot (Montesacro). Besides it has been planned to start both the pre-operation and the driving school of the trolleys during the autumn 2004.Trolleys basic concepts:• Replace conventional diesel buses on the links entering the Limited Traffic Zone in Rome;• Avoid fixed installations (i.e double wire overhead lines) along the section inside the protected area• Keep zero-emission standard everywhere• Adopt battery hybridizationLine Characteristics:• Total length: 11,3 Km• Overhead line section: 10 Km• Pure battery section: 1,3 KmVehicle Characteristics:• Length: 18 m• Width: 2,55 m• Passenger Capacity: 138• Handicapped area: 1• Overhead line voltage: 750 V• Battery voltage: 480 V• Battery capacity: 80 Ah• Battery autonomy 12 km

The clean bus fleet at Rome site has been enlarged, the aim was to replace at least 25% of PT fleet with clean vehicles Euro III Standard and electrical vehicles: on a fleet of 2.466 buses at present 1.107 are EURO III buses and are operating on PT lines included in the Laboratory Area.Furthermore, the average age of ATAC buses is now 6.9 whereas just in the year 2000 was 12 years.What Rome is expecting to achieve in the next 3 years is the replacement of further 500 buses with CNG ones.In order to evaluate the effect of introduction of a large numbers of Euro IV buses analysis campaign will be deployed: consumer awareness, satisfaction and cost-effectiveness of clean vehicles will all prove key indicators.
Topic:
Clean and energy-efficient vehicles
Archive
Country:
Italy
City:
Roma
Contact:
Massimo Del Carpio
Author:
Massimo Del Carpio
Keywords: