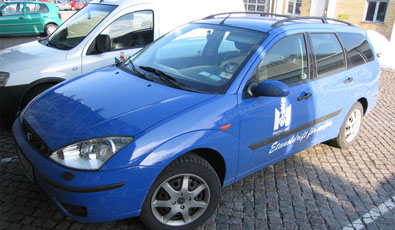 Many of the 18 000 employees at City of Malmö will gain a first hand experience of driving a clean vehicle and the public will be more likely to view clean vehicles as mainstream. 365 new clean vehicles will make the municipal fleet closer to totally clean, from about 45% in the beginning of the CIVITAS SMILE project. Photo credit: City of Malmö

This measure, will take the City of Malmö towards a municipal light car fleet of close to 100% clean vehicles by 2008. With almost only totally clean vehicles in the light car fleet there will be very few alternatives but to use these cars. Since many people use these vehicles, as a part of the municipal car pool the positive experience of the vehicles is spread more widely compared to if individual car users bought 365 vehicles.

The increased use of clean vehicles is today hindered by a lack of information of alternatives such as gas, ethanol and electricity, in combination with higher investment costs and the uncertainty of which fuels will be available locally in the future. It is the municipal units that decide which car will be selected and purchased.The City of Malmö will procure 365 clean vehicles. The city employees when in duty, instead of using their own private cars, use these vehicles. These vehicles runs 20 000 km on average per year. The total mileage will be approx. 7 million kilometers per year, 28 million kilometers in four years. Moreover, the employees are discouraged of using private cars when traveling to work.>The demonstration effect is the most important aspect of the activity; the vehicles will be clearly marked as environmental vehicles and highly visible during daytime traffic in Malmö. Since many people the positive experience of the vehicles is spread more widely use the vehicles compared to if 365 vehicles was bought for private use (City of Malmö has 18 000 employees and potential users).

By the end of 2008 over 300 new clean vehicles have been purchased for the City of Malmö within the CIVITAS SMILE project. The clean vehicle purchases will continue at the same speed until 100% of the vehicle fleet of Malmö is clean.

About 65% of the municipal light car fleet (cars, vans, mini-buses) were considered clean in September 2008. Reductions in emissions as the result of the measure expressed as both absolute levels and per vkm: - CO2: Reductions ranging from 92834 to 241776 kg/year or between 7.3 to 19 grams/vkm; - NOx: Reductions ranging from 24 to 32 kg/year or between 1.9 to 2.5 grams/vkm; and - PM10: Reductions on the order of approximately 1.4-1.5 grams/year or between 0.11-0.12 grams/vkm. During spring 2008, over 3000 people took part in the SMILE General Public Survey. One question asked respondents to name measures in the City regarding transport and the environment. The largest response environmentally-adapted or “clean” cars at 34%.
Topic:
Clean and energy-efficient vehicles
Archive
Country:
Sweden
City:
Malmö
Contact:
Anna Jersby
Author:
Anna Jersby
Keywords: