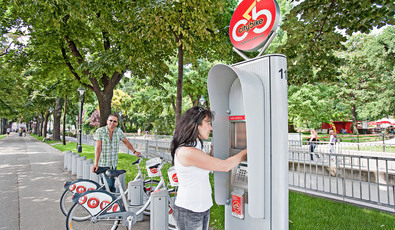 Since 2003, the city of Vienna has offered both residents and tourists a free way to travel in the city by bike. Progressive hiring rates, mandatory registration with name and address and upkeep of bike systems are seen as the strongest factors of success with Citybike Wien.

Since 2003, the city of Vienna has offered both residents and tourists a free way to travel in the city by bike. For an initial registration fee of 1 Euro with a credit card, trips under an hour are free - one only needs to re-dock the bike at the loading site and wait 15 minutes for an additional hour. Any travel exceeding one hour is charged approx. 1 Euro per hour.

The affordability of the system and first hour free aims to prevent users to borrow bikes for over an hour. Statistics show  that 97% of bike users hire biks in Vienna for under an hour.

Further, many bike stations lie either at U-Bahn (subway) stations, tram, bus or city-train stops, allowing users to easily integrate other forms of public transportation with Citybike use.

Citybike Wien is a project of Gewista Werbeges.m.b.H. together with the city of Vienna.  Sponsors include Nokia, One, Vöslauer,  the Raiffeisen Landesbank of Lower Austria help to fund the bike service, using the bikes as product advertisement. Therefore, no financial suppport is needed from the City of Vienna, making this a tax-payer free project.

Bike terminals are equipped with a touch screen and offer a clear arranged service, e.g. a station map. Maps show up-to-date information on how full the various city stations are, allowing users to prepare where to return their bikes after traveling. Stations tend to lie within a kilometer of each other, allowing easy access to neighboring stations for bike return. Problems are communicated directly to the Citybike Vienna team through the station management.

Currently there are 320.000 registered users, dating from initial creation in 2003. These numbers continue to rise and represent over 500.000 trips per year.

In Vienna, studies show that 50% of the driving lengths are about 5 km and could be therefore done by bike. Therefore, Citybikes can be seen as both a functional and leisure activity.

The city of Vienna currently has a modal split of 6%, up from 4-5% when Citybike Wien started. (in comparison, the highest modal split can be found in public transport, which in 2009 measured 36% or 800 million rides)

More information can be found at www.citybikewien.at (in German and English).