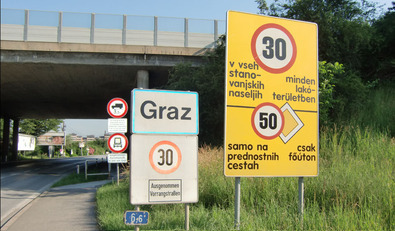 The original enforcement of speed limits by a private company in Graz has been stopped by the superior court. Now city staff that is sub-contracted to the police has taken over this job and continues with ca. 180.000 measurements / year.

In 1992 the speed limit of 30 kilometres per hour was introduced in Graz's side roads. The goal was to increase road safety and improve living standards. Although the number of accidents decreased during the last years the speed limit was not always respected. The police wasn't able to enforce speed limits with own staff.

Therefore the company Speed Control started to supervise car drivers for 20 hours per week. These controls especially took place in areas where there is a 30 kilometres per hour speed limit. If the company measures any excedings they report these to the police.

In 1992 Graz was the first city in Europe who introduced a speed limits for the whole city: 30 kph (18.75mph) in all residential areas / side roads and 50 kph (31.25mph) for all major roads - for increasing of road safety, reducing pollution, and noise.
In February 2006 a private company undertook the function of controlling the speed limit only in 30 km/h speed limit areas

Administrative basis:
To control and monitor the speed limit of 30 km/h, the City of Graz made a tender for the service for a private speed control. Only private companies with business licence, trained personnel and with calibrated devices for the speed controlling were admitted.
The private company made the controlling and monitoring of the speed limit. The collected datas were given to the police which in turn hand them over to the office for punishment. This office sends out the punishment depending on the height of speeding to the traffic offenders.

But this solution has been skipped by the national superior administrative court after approx. 3 years of operation. In 2010 after a final legal check the new solution is the following: It is now allowed for cities to enforce speed limits by own staff. This staff has to be sub-contracted to the police. They are doing the measurements as well as the administrative work for the fines on behalf of the police.  So, the police doesn't any more deal with enfocement of speed limits in the 30 km/h zones but also private companies can't be contracted for this job.

Although the car drivers and the media also protested against the enfocement the private radar controls are continued after the first stop of the measure. While in 2006 the speed of 150,000 vehicles was measured (15,800 of these drove too fast), in 2010 182.000 measurements have been carried out and 14.460 car drivers were fined. 20% of the fines have to be forwarded to the national government of Austria. The rest could be used by the City of Graz.  The new system definitely served it's purpose to increase traffic safety and improve quality of life. It is planned to expand the system by employing more staff. .