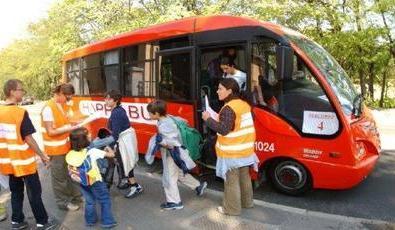 The project “Happy Bus” was implemented by the Tep in collaboration with the municipality of Parma. It consists of a scholastic service which collects pupils of elementary and middle schools in front of their houses and gives them a lift to their schools. During the drive, lessons on environmental issues are held and educational films are shown.

The scholastic service “Happy Bus” was created in 2003 by Tep in collaboration with the Department for Education and Social Policies together with the Department of Mobility of the municipality of Parma
It was recognized since 2008 as an innovative pilot scheme on a national level.
Also in the current school year 2011-2012, after eight years of service, this particular project confirms its remarkable success.
It is indeed a service of elevated quality, comprising 45 ecological methane buses, equipped with technologies for the projection of educational films. In fact, on the way to school, lessons on environmental issues are held by qualified pedagogy students, who constantly follow the pupils during the journey.
We can affirm that the two main objectives of the project have been reached. Firstly the traffic is strongly reduced during rush hours, due to the decrease in number of cars in the city, improving the quality of the air as a consequence. Secondly a high quality, ecological and safe school transport service is offered to the inhabitants, giving the opportunity to the pupils of public and private, elementary and middle schools to take part to the initiative.

Until 2010 “Happy Bus” collected the children in front of their homes or at a maximum distance of 150/200 meters from their houses and driven them to their schools.
Starting from 2011 the offer has undergone some slight changes because of the reduced regional and national budget available for the service.
The administrators of Tep decided to fix for the older guys, that is for the pupils attending the fourth and fifth class of elementary school and for those of the middle school, more gathering points and less bus stop right in front of houses. In this way the parents’ collaboration is required in order to accompany the children to the meeting point.
Despite the budget reduction, the number of students enjoying the use of this “door-to-door” service keeps on increasing. Having fewer resources available for the project, Tep adopted this new system in order to satisfy the users in the best way, saving time and money.
The success of the initiative is confirmed in fact by number of users in the period 2003-2011, in other words starting from the beginning of the project.>Tep can accept yearly around the 90% of the requests: 1250 accepted in 2008, 1410 out of 1529 requested in 2010, 1477 out of 1628 in 2011; all together about 50 schools join the initiative.
The non-stop increase in applications shows how the initial resistance and distrust of parents towards this alternative transport project for their children have been overcome. The bus service guarantees a seat for everyone and, on the other, information and education using videos as a way to sensitize pupils towards ecological and environmental issue with the constant attendance of the staff in charge.
Another important aspect of this initiative is the use of special means of transportation: 45 ecological methane-powered buses.
Moreover the subscription fee depends on the family income and for 2011 varies from a monthly minimum of 0 to a maximum of 37 euros.
There is still a critical issue related to the difficulty of coordination between transport services and timetables of the various institutes, which plan times of entry and exit on their own, fixing them permanently when the school year has already begun, without taking account of the problems associated with transportation needs.
Despite changes to the service, more and more families rely on "Happy Bus", convinced of the importance of the project and pleased with the service. This aspect confirms the increase in environmental awareness of society and the changing attitude towards innovative projects concerning with ecologically sustainable mobility.

“Happy Bus” keeps on having positive results. First and foremost, the traffic reduction during rush hours, with a resulting decrease in air pollution. Secondly, the increase in demand has confirmed the rise in parents’ trust in alternative public transport and therefore also in their children. Finally, the pupils keep on being sensitized to environmental issues by funny and entertaining educational tools, enjoying them very much and in the same time awaking their ecological awareness.