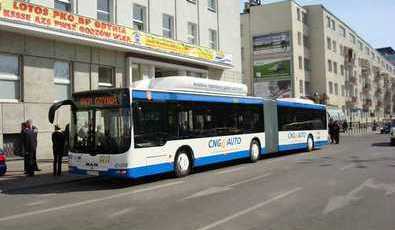 The transport authority in Gdynia Poland introduced 5 CNG buses matching the EEV (Enhanced Environmentally Friendly Vehicle) emission standard in September 2007. The current fleet will be extended with another 15 buses (20 in total) until 2010. A fast fuelling station will be build up in the bus depot in 2008.

In September 2007 the transport authority in Gdynia introduced 5 new MAN CNG buses matching the EEV emission standard. Additionally a fast fuelling station will be build up in the bus depot in 2008.
The new buses will run in the city at bus lines 171, R, 107, 147, 150 and 152.

All new vehicles are equipped with air condition.

Emissions
Due to the high emission standard the new buses are environmentally friendly in terms of PM, NOx and HC exhaust gas emissions.

Further steps
Till 2010 Gdynia Transport Authority plans to introduce 20 such CNG buses in the public transport system of the city.

More information is available at (PL):