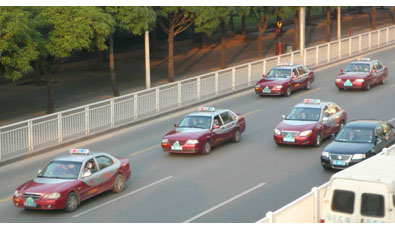 In China a car manufacturer and a bus operator teamed implementing a fully electric taxi fleet.

Shenzhen is a city with a sub-provincial administrative status in southern China's Guangdong province, situated immediately north of Hong Kong. The local government plans to make Shenzhen a green city by introducing electric vehicles. According to the plan, the city will have 24.000 electric vehicles and 12.000 charging stations by 2012.
The use of electric taxis is part of this plan. The central government is subsidizing the purchase of each taxi with up to 60.000 yuan. The Shenzhen government is drawing subsidy plans to support electric taxis.
Since May 2010 the first batch of EV taxis is on the streets of Shenzhen operated by Pengcheng Electric Vehicle Taxi Co.Ltd., a joint venture between BYD (Chinese car-maker) and the Shenzhen Bus Group.

Pengcheng Electric Vehicle Taxi Co. Ltd. is operating 40 BYD E6 electric taxis. The car manufacturer delivered 100 of the electric cars by the end of June 2010. The 5-passenger cars travel with up to 140 km/h and consuming 21,5 kWh of power per 100 km.

China South Grid, the local utility, has two charging stations in Shenzhen, one with six quick chargers and the other with three standard chargers.

Due to the limited charging equipment, most BEV taxis need to return to Pengcheng - the taxi companies - headquarters for charging. That´s why the operator compiled a detailed charging schedule to guarantee a constant flow of running taxis.

The taxi companies scheduling and electrical design does not allow cars to run over 200 km. Under ideal circumstances the mileage of an electric taxi could be more than 300 km. But different reasons limit the range, for instance in summer the electricity consumption of the air condition is about 30 %.

Maintenance and repairs are conducted by one BYD store located in Shenzhen, due the specialized technology of BEVs only BYD has the resources and technicians at the moment to do that. On the other hand this secures that necessary product improvements are flowing back to the producer directly.

Saving money on fuel due the lower prices of electric power compared to gasoline is one of the positive aspects of running a pure electric taxi fleet. 100 km with an electric taxi cost 30 yuan, while the traditional taxi 100 km fuel consumption of 12 liters of gas cost more than 60 yuan.

The companies’ taxis with combustion engines run two shifts a day the average daily mileage is 497 km. That’s more than two times the mileage of a fully charged electric taxi.

Full charging takes about 1.5 to 2 hours using “quick charge” and 4.5 hours using normal charge. This demonstrates one of the bigger problems running pure electric taxis, because a car with exhausted battery cannot pick up any customer. That is, why Pengcheng came up with a shift system for the drivers.

The problem is that, due to the limited range and the waiting times, the personal income of an electric taxi driver is lower than that of a traditional taxi driver.

The taxi operators’ average daily fuel consumption is 61.7 liters / day for a taxi with combustion engine. If an electric taxi reach the same mileage as an traditional taxi it can save local emissions of 5,18 tons of carbon dioxide each year.

The much higher total costs are real obstacles in BEV commercialization.

This biggest hurdle - the much higher cost - could be compensated partly by subsidies from central and local governments.

BYD will be delivering 250 more electric taxis to Pengcheng by August 2011 in an effort to further introduce the use of electric taxi in the city. BYD will also be providing 200 electric buses that will be added to the city’s existing public transportation just in time for the Universiade.