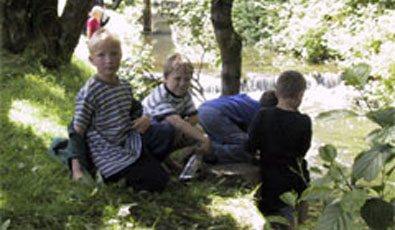 As one of 10 local authorities the municipality of Sandnes received an invitation from the Ministry of Children and Family affairs to participate in a program called Children's trails". The campaign which started in 1998 has the goal to improve the area in which children and young people live, play and grow up.

The municipality of Sandnes is a perfect place for such a campaign as it is situated in the Nord-Jaeren region which is running alongside a fiord. The forests and mountains that are close to the town display a perfect recreation area for inhabitants of all ages. During the campaign "Children's trails" green play areas, tracks or paths should be created where the young people can play and be active. The activity should support the children's interest and include them in municipal planning. They are also invited to contribute in shaping their own environment. Other objectives of the campaign are to create a platform for future land use and to follow national directives in children and youth activities.

In the implementation of the whole project children between the age of 8 and 13 years, school teachers and nursery school nurses were involved. The children in all schools in Sandnes were encouraged to mark their favourite places on a map. They also pointed out the advantages of special areas and paths in the region. The information was summarized into digital form and is available through the municipal mapping program and intranet system. The implementation of the campaign lasted from 1999 to 2001.

The mapped information is used by the municipality in every planing process. The tracks developed to important areas for physical activity (eg. cycling) and the project is carried on through physical planning and development.