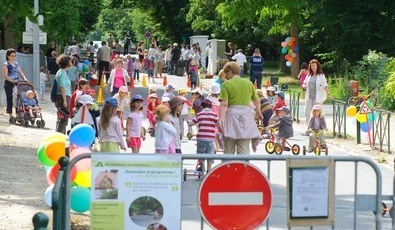 During the European BAMBINI project, ARENE and the three cities of Bois-le-Roi, Suresnes and Saint-Rémy-lès-Chevreuse implemented home zones (shared space with a speed limit of 20 kph) and children’s streets. They aimed to change streets into liveable places that are friendlier to children and conducive to active modes of travel.

In France, children’s habits have drastically changed over the past decades (source: AFSSA). The main changes have included less active travel, more sedentary activities and the consumption of more sweet and fatty foods. In addition, children have been socialised earlier to using the car as a primary mode of transport and less and less to using active modes of travel.

One of the activities of the BAMBINI project was the implementation of children’s streets. Children's streets introduce children to alternative modes of transport, by enabling them to play and learn in the street itself. The concept is inspired by the Belgian playing street. It entails closing a street to organise play or educational activities for children that are related to alternative modes of transport. A few examples can be found in France, but they are rarely sustainable mobility-related.

On a regional level, the main goal was to develop children’s streets in Ile-de-France while creating good practices in the three implementation cities and testing activities and materials to build a toolkit for a wide dissemination of BAMBINI know-how.

In Bois-le-Roi, children’s streets were implemented in order to encourage children and their parents to use active modes of travel as energy-efficient solutions for their daily mobility within the area. The local context was a residential area with 277 inhabitants (52 families) and 3 facilities for children under 6 years of age (crèche, kindergarden/preschool, leisure centre). About 309 children under 12 travel within the area everyday, including more than 50 pupils who join a daily walking bus.

The same street in Bois-le-Roi was turned into a children's street twice: on the 15th of June 2011 and on the 5th of October 2011, from 13:00 until 20:00. These events were linked to a home zone project on this street (see Eltis case study 3434) and were prepared in a participatory way with inhabitants. A communication campaign was launched for each event, which included a set of posters in the street and at children's facilities, an article in the city council newsletter, a letter to parents distributed by educators/teachers, and flyers sent to inhabitants.

The street was temporarily closed to all motorised traffic by public decision of the mayor. From 16:00 until 19:00, the street was dedicated to children's play or educational activities for kids with a focus on active modes of travel.>Activities were organised by ARENE and pedagogical experts from Vivacités. All logistical matters were dealt by the city council: closure of the street, the hanging system for the posters, provision of tables and chairs, catering, etc. Bikes, tricycles, rollerblades and their accessories were borrowed from the leisure centre.

During the children's streets event, 26 educational and play activities were organised with a focus on active modes of travel, mobility behaviour, energy-efficient transport and quality of life. Examples include: “Allô doctor bike?” (Bike repair workshop), training on active modes of travel by parents or educators (bike, rollerblades, scooter, tricycle), BAMBINI wooden toys and colouring-in postcards, BAMBINI spinner challenge, creation and exhibition of road signs on mobility, a pantomime song, drawing on the streets, a photograph game, a quiz game on mobility, an agility game, a donkey tour on rollers, etc.

Besides those activities for children, a BAMBINI stand was held by representatives of ARENE and the city council to explain the purpose of children’s streets and home zones, to raise awareness of active modes of travel, and to acknowledge the previous event.

The costs for organising a children's street are low. Each event was organised in around one month.

About 250 children and 135 parents participated in the two events. On average, 25 people were involved in the organisation of each event. The vast majority of the children (91%) enjoyed the children’s street a lot. Nearly 200 children under 6 years were introduced to or improved their skills with regard to active modes of travel. The participants in general regarded the children’s streets as a relevant way to promote active modes of travel as energy efficient modes; 4 out of 5 respondents stated that it encouraged them to walk and cycle more with their children for short trips.

Children's streets offers a convivial and direct way to inform inhabitants and to discuss the advantages of road transformation. It enables the city administration to meet the inhabitants in their street or neighbourhood (in addition to public meetings and a walking audit).

The city administration, local inhabitants and representatives of children facilities inaugurated the new home zone with a third children’s street in September 2012.