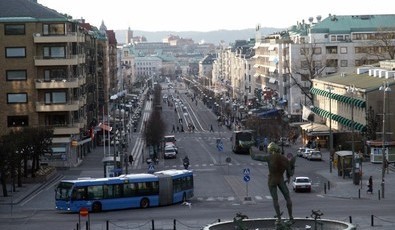 The project in Lundby (in Göteborg, Sweden) aimed at changing shifting car driver's travel behaviour to more sustainable alternatives. After 6 months, the number of participants who drove to work every day decreased from 25 to 2. All the participants believe they will continue with their new travel habits.

In 2002 Göteborg opened a Mobility centre in the Lundby city district, a former industrial area now being redeveloped. Lundby Mobility Centre (LMC) has been working with measures to raise awareness and change attitudes towards more environmentally friendly means of transport. In August 2006 LMC started the Mobility Coaching project.

Rather than changing individuals attitudes towards travel, this project aimed th change their actual travel behaviour. The target group comprised motorists who used no other means of transport than their car. Participants signed an agreement with the Traffic & Public Transport Authority/LMC whereby they undertook to leave the car behind at least three times a week. In turn LMC agreed to support and encourage the participants to help ensure they managed to fulfil their side of the agreement.

The project was part of the EU project BUSTRIP, involving 12 European cities around the Baltic Sea.

Participants were assisted by a coach to set their own goals and keep their motivation up. The participants divided themselves into sub-groups based on what type of people they considered themselves to be: “Challenge me”, “Put pressure on me” and “Lazy and comfortable”.

Participants tested fitness, weight and muscle mass at the start and end of the project, and kept a travel diary to clarify their behaviour. They were offered lectures on diet, movement and personal motivation, as well as help in finding public transport routes and getting around to visiting the cycle repair shop.

The project has been evaluated through surveys and interviews. The participants’ car driving decreased significantly and all the participants believe they will continue with their new travel habits. The project must therefore be viewed as very successful.
However the definite result will not show until after a longer period when we can see if the new habits last in the long run.

The goal was to reduce dependency on the car and emissions, but many participants got involved for reasons of health and exercise with a focus on cycling. The coach believes that a key to succeeding with a similar project is to be open to people’s reasons for taking part. In the future this concept will be offered to workplaces where the sense of community and group pressure can have a positive impact on the results. Mobility coaching will also be offered to new residents developing residential areas.