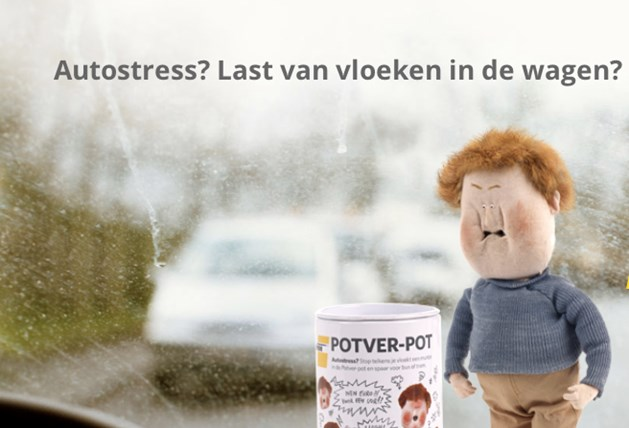 Driving can be a stressful and frustrating activity, particularly in Flanders where some 95 per cent of drivers vent their anger with traffic by swearing. Armed with this data, Flemish public transport company De Lijn launched a clever marketing campaign encouraging drivers to swap from cars to public transport.

Through the use of direct marketing tools, television, radio, and social and digital media, De Lijn produced its Potver-pot (swear-jar) campaign that in 2013 resulted in a prize for the best Belgian television commercial, and which managed to raise significant awareness of the public transport services it provides.

In 1990 the Flemish government founded by decree the ‘autonomous public enterprise’ of De Lijn, which provides public transport to 6.5 million Flemings. In 2012 De Lijn transported more than 544 million passengers using its fleet of about 2 326 buses and 370 trams. This represented an increase of more than 10 per cent in five years and of approximately 140 per cent compared to 1999.

This increase took place within the context of a sustainable mobility plan of Flanders - adopted in the beginning of 2000 - in which improvement of the quality of public transport was one of the key objectives.

Strong, well-designed branding and consistent and regular marketing by De Lijn has created a positive image of the company and its services among citizens. The Potver-pot campaign is just one part of a longer-term marketing strategy.

The focus of De Lijn’s campaign was to promote the idea that travelling in the region was much more fun with bus or tram, and less stressful than driving. Central to the campaign was Juul the Stress Doll, who features in the advertisements and appears on the jars. The jar is positioned in the dashboard cup-holder and each time a driver swears, the theory goes, a coin must be put in the jar. The money saved, De Lijn suggests, should be used to buy a ticket for a stress-free public transport ride.

The campaign, which is aimed a people who travel occasionally, or during off-peak hours to shop or to pursue leisure activities, adopted the ‘memory curve’ approach. This is a concept where information to the audience is repeated over time to help them to remember the content.To this end, De Lijn launching three campaign waves (one during the summer, autumn and spring). The first wave started in the summer of 2013 during the seasonal retail sales, with the launch of Juul the Stress Doll as a nervous driving intsructor.

The second wave took place in October 2013 when De Lijn distributed potver-pots for free on two Saturdays in 11 Flemish city centres. The third wave started in spring 2014 with the launch of the Stress Doll game, and the Stress Doll GPS voice, which can both be downloaded for free from the De Lijn website.

The campaign was supported by a television and radio commercial, a press release, social media activity (Twitter and Facebook) and a dedicated Potver-Pot campaign website(link is external). There were also advertisements in newspapers and on the oustide of buses. Through the website, users could also apply for a SMS ticket that allowed an hour of free travel on public transport.

As part of De Lijn’s long-term marketing strategy, the direct impact of the campaign on the number of non-peak hour passengers cannot yet be established, although there was slight increase of non–season ticket sales (i.e. off-peak travel) in 2013. The campaign, however, was a great success, reaching a large audience through television, radio, social media and the official website.

Television and radio
The TV and radio commercials were broadcast during the first and second wave of the campaign on Flemish broadcast channels. The television commercial won the prize for best Belgian commercial of 2013, which contributed to extra exposure in national and local media.

Digital media
Analysis shows that in October 2013 (the second wave of the campaign) more than 450 000 Twitter users were reached with information on the campaign. On the day of the campaign launch alone, this figure was more than 300 000. The days on which the potver-pots were distributed also saw a spike in related social media activity. The television commercial clip on YouTube had about 1 2 million views by May 2014.

The website received nearly 190 000 hits, with users staying on the website for an average of one minute. Around 7 700 Facebook users shared the website’s content, while 5 400 ordered the free SMS-ticket. The Stress Doll game, which can be downloaded for free, was launched in May 2014.

De Lijn is a very good example of a public transport company taking public transport marketing seriously and making this an important and consistent element of their business. Although the strategy and the campaigns are produced by De Lijn’s in-house marketing staff, it has also hired an advertising company that further develops and promotes the campaign.

De Lijn’s long-term branding strategy has created a positive and well-known image of the company, and it believes that the substantial growth in the number of passengers in the last 10 years can to some extent also be attributed to this. The overall strategy is supported by other campaigns such as the Potver-pot campaign. Although this particular campaign focuses on one specific target group  - non-daily off-peak travellers - and one specific  positive aspect  of public transport, (namely, stress-free travel) , the success of the campaign meant that De Lijn managed to reach a much larger group of potential travellers.

De Lijn reports that there were no negative reactions or processes that did not go well. It also says that whether a campaign like this is applicable  in other countries depends on the context, focus and strategy of the public transport company concerned.