The Challange for the car campaign in Kaunas. Lithuania 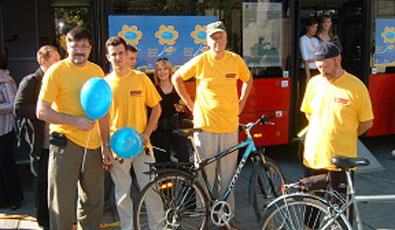 The demonstration action “Challenge for the car” took place within European Mobility Week on September, 2006. The purpose of the competition between car driver, bicyclists and user of public transport was to compare effectiveness of different traveling mode in the city and to promote using environmental friendly modes of transport.

Kaunas city is the second biggest city in Lithuania with the population of 360,600 and the area of 155,5 sq. km. Though in Kaunas there is not such a high level of traffic congestion as in Lithuanians capital Vilnius the number of private cars is increasing steadily each year. Nearly a quarter of Kaunas city population (about 90,000) comes to the city centre by theirs own cars. It impacts on an increase of traffic congestion and on high level of air pollution, particularly in the old town. The objective of the demonstration action “Challenge for the car” was to show that there are alternative ways to travel fast in the city not only by car.

To show effectiveness of different traveling mode in the city and to promote using environmental friendly modes of transport a competition race was organized where a car driver, a cyclist and a public transport user participated. All of them should reach the same target within the city starting from the same place. Members of the City Council participated in this competition as the bicyclists and as a user of public transport. The length of route was about 8 km. All the participants reached the finish almost at the same time - the winner was the car driver, 3 minutes later arrived the public transport user and another 3 minutes later the cyclist.>This action was organized by Kaunas Regional Energy Agency KREA together with Environmental Protection Department of Kaunas City Municipality.

The main problem was to set the route of competition due the safety of participants. Therefore the race course was selected where safe cycle route exists but unfortunately there is not a high level of traffic congestion. This factor determined that unfortunately the car driver was the winner of the competition. For followers it is important to find a route where the car driver isn’t at an advantage (e.g. find a target where parking spaces are rare or where the trip from parking space to the target isn’t too short).
Though the car driver was the first to reach the city center in Kaunas the action can be classified as a success because it has showed that travel by car in city (especially short trips) has not a big advantage compared with other modes of transport. The participation of politicians (as decision makers) in this action was also a good opportunity for them to survey the real situation on the cycle routes in Kaunas. As it turned out, it is very important also to arrange an attractive campaign in order to engage the mass media and TV. The reportages about this event were shown on the most popular commercial TV and on four regional and local TV, the articles were published in the popular daily newspapers as well.

The action has been carried out only once but has a good potential for other followers.