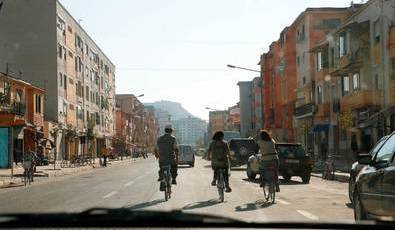 Shkodra, a city of 114,000 inhabitants in northern Albania, has a remarkable modal split compared to other cities in Albania and southeast Europe: 43% pedestrians and an extraordinary 29% daily cyclists (Source: Shkodra MOBALB household travel survey 2011; 500 households).

Taking into consideration the fragility of shifts in transport modes in cities with transition economies, in particular in car-mad southeast Europe, the compact and historic Shkodra deserves special attention. Once the transport modes of the poor, walking and cycling are today seen as a strategic asset in the urban development of Shkodra for both economic and environmental reasons. The revival of cycling in Europe, the CIVITAS references and the MOBALB donor project are all convincing elements for Shkodra to continue its efforts in a tailor made SUMP process.

The MOBALB donor project on urban mobility 2009-2012, a collaboration between the Municipality of Shkodra, the Institute of Transport in Tirana and the Flanders’ Government, has paved the way to a better understanding of the sustainable urban mobility process. Some basic surveys have been conducted, including the household travel survey, a bicycle policy audit, and home to work and home to school surveys.

Two striking figures emerged from the home to work surveys: 51% of the civil servants of the Municipality walk to work, while 30% cycle to work; 41% of the workers of the shoe factory Berttoni use the company bus, 38% cycle and 18% walk to work. The 29% cycling share ranks Shkodra the top cycling city in southeast and central Europe. There is full gender equity in urban cycling.

Another peculiarity is that Shkodra is a champion in privately owned on-street cycle racks per square metre in Europe. Moreover, the streetscape of Shkodra is structured along boulevards where shared space is still the prevailing rule thanks to a dominant and proud cycling tradition.

It is perhaps paradoxical that sustainable transport is already a reality in Shkodra with the 72% active travel modes, but this is heavily challenged due to rising levels of car ownership. How are residents being engaged in preserving their urban travel life style?

The revival of cycling in European cities, the ELTIS references, Shkodra’s prevailing walking and cycling culture, the city’s travel habits and the MOBALB project are all important factors which encourage Shkodra to continue its efforts in a tailor made SUMP process and to act as a role model for medium sized towns in southeast Europe.

The main purpose of the MOBALB project is to promote, reorganise and develop urban transport systems, and to achieve a more efficient, reliable, safe and sustainable transportation. Visit www.mobalb.al - click on Shkodra Demo for more information.