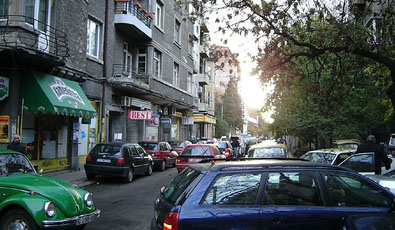 The Bulgarian capital’s ever more increasing private automobile traffic and the general unreliability of the public transportation have triggered some more resourceful members of the public to implement and popularize carpooling.

In 2007 over 300,000 automobiles were imported in Bulgaria. Since the beginning of 2008 on average 700 - 800 cars are being registered daily in the capital CAT (Control of the Automobile Transport) agency. In 2000 the statistics show that there were 240 cars per 1000 Sofia citizens. Currently, there are 600 cars per 1000 Sofia citizens. One third of the cars in Bulgaria carry Sofia registration. (CAT statistics; www.kat.mvr.bg)

With the constant increase of automobiles in the country in general and most visible in the capital of Sofia, transportation has become a daily frustration for people. The situation had been truly overwhelming as even public transportation has become a means for delays and disappointment instead of being an alternative. However, instead of keeping with the disappointment some Bulgarians have tried to create the alternative themselves by following and applying already existing example - carpooling.

For the past two and a half, three years the concept of carpooling among young Bulgarians has become gradually identified. It has appeared in the Internet space in the form of a forum which hosts advertisements of travel routes from people who either are looking for a lift or are providing such. Currently there are three web pages providing access to the care sharing initiative. Sofia, being the capital of Bulgaria and best developed economically is naturally the center of the activity. The carpooling related searches are most for covering routes from the farther living areas of Sofia to its center and the reverse. Gradually though, the idea is reaching to other cities in the country, mainly bigger ones.

Following the example of many international web pages, the Bulgarian carpooling portals provide for a constant self check.>In order to be able to take advantage of the posted ads or to post an ad yourself, you have to register a profile within the web page and provide for details of your car. Of course once you have advertised and successfully finished your trip you are voted on your performance by the people who shared your car. This is the control and quality management option of the service the carpooling partners exert on each other.

For the time being carpooling in Bulgaria is mainly concentrated in the capital and the cities within 150 km radius due to the country’s economical development. After all, a car park and internet access are two of the main “ingredients” of car sharing. The desire to do it or experience it is the third main element. The Bulgarian type of carpooling is based on the desire to save time, avoid endless traffic jams, and save some money. The desire to share a car because of cleaner environment management reasons is still not visibly on the forefront. However it is being gradually referred to by more people whose lifestyle for one or other reason is more strongly connected to nature.

Carpooling in Bulgaria has still to gain in popularity, but generally it has had a good start based on the pro-activeness of the community. At least for the past three years of its official public existence, it has stopped sounding awkward and scary and has been appreciated as a real alternative. After all this is a completely new experience for a small Balkan nation as Bulgaria, even though car sharing has been a very old concept and practice in Western Europe for example.

Realizing and implementing the option of carpooling in Bulgaria though has been a good example of a typical national characteristic. As every Bulgarian child learns from the oldest and most popular folklore narrative “The Woe” - whenever you don’t know how to help yourself, you should call for the woe and she will help you!