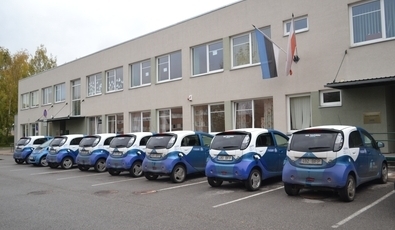 In 2011 Estonia obtained 500 Mitsubishi i-MiEV electric cars in exchange for selling their emission quotas. The city of Tartu allocated their share of electric vehicles for the use by care workers in the city.

In 2011, Estonia obtained 500 Mitsubishi i-MiEV electric cars in exchange for selling their emission quotas. The government announced that the cars would be given free of charge to the social workers of local governments for performing their duties. As soon as this news was published, Tartu City Government submitted an application to the Ministry of Social Affairs for 30 electric cars. In addition to the cars given to the social workers, Tartu City Government applied for a grant to buy four electric cars for use by city government officials for work-related travel.

The aim was that the high number of new electric cars would bring about a dramatic improvement to the quality of social services and would help to reduce work related travel costs.

The cars have been in use since late 2011 and will remain in the possession of care workers until 2015. Each car that Tartu received has been accompanied by one recharging point. The funds obtained by selling the emission quotas are used to install electric vehicle recharging infrastructure across Estonia. In addition, there will also be 15 public recharging points in Tartu.

17 small electric cars are used by the home care staff at the Day Centre Kalda, others are used by the regional centres of the Department of Social Welfare in Tartu City Government.>The workers who use the electric vehicles are usually in-home care providers that buy and deliver food and medicines and do the tasks that the service users cannot do themselves. Before they had use of the cars, the care workers either walked or used public transport when providing in-home care services.

The care workers are very satisfied with the cars which have helped them do their job faster and more efficiently and in doing so providing better care for more people. This is good for both the care workers and their clients.

The introduction of electric cars is an innovative and future-oriented project, which can help to save energy and the environment. The maintenance of electric cars is considerably cheaper than that of regular vehicles, which reduces the cost of travel per kilometre. This enables the City Government to cut costs on work-related travel.

As Tartu is a rather compact city and the distances that the care workers need to cover are rather short, these small and economic electronic vehicles are ideally suited. According to the experiences in the Day Centre Kalda, the cars needed to be charged only once a day even during cold winter days. However, when it was -30ºC, almost 50% of the cars had starting problems. But still under his extreme weather conditions which usually last for some weeks per year only more than half of the vehicles performed properly.

The electric cars will remain in use of the social workers of Tartu until 2015.