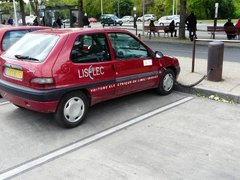 La Rochelle, a city of 135.000 inhabitants on the French Atlantic coast, was one of the first European cities with a traffic policy aimed at reducing environmental pollution. As a part of this policy the municipality has been promoting the use of electric cars, bicycles and public transport.

The main objectives of the project were :

This service remains however a public service.

This project has 50 cars - 25 Peugeot 106s and 25 Citroen Saxos. The project is an urban mobility system for cities that want to broaden their range of public transit solutions. It provides program members with shared access to electric vehicles, which are available around the clock at self service stations. Inaugurated in La Rochelle on 22 september 1999, the project has since generated an encouraging response in the marketplace.

In one year, more than 250 clients have joined the initiative and now make daily use of the 50 cars that were deployed in La Rochelle.

The cars are parked at 6 recharging stations near high use locations, such as the train station, the bus station and the university. In response to the steady rise in the number of program members, with four or five new sign ups a week, La Rochelle has decided to expand the project by opening two more stations.

Users are generally young and 75% of them are men. The customer base is composed primarily of students, tradesmen and shopkeepers, employees and managers and self employed professionals. As of mid September 2000, the 50 cars had been driven a total of approximately 100,000km. 15,000 trips were made in total.

At the end of 2001 the number of members had increased and 2200 trips/month were being made. The authority is considering the addition of light vans for goods transport.

For the last 6 months, the main works concerned the realisation then the analysis of the survey on the behaviour of the different strategic target groups. Around 500 people were interviewed and answered which means a significant result. The main targets were students, enterprises, tourists, people in commercial zones, administrative organisations.

The analysis is not yet completed but some conclusions can be already made. The main motives for car sharing are reduction of travel costs, ease of finding parking places for the vehicle and action for the environment. The trips targeted are home-work and shopping. The difficulties lie in the costs, the real availability of vehicles and difficulty of anticipating the trips between stations.

Other activities in this measure concerned :

In La Rochelle the trips are enough short so that no problem appears with the autonomy of electric vehicles.
Main characteristics of the project :

Total reduction of greenhouse gas emissions and other pollutants :

The acceptance of the public and customers (and also own staff) is very good. Hence, a survey of 130 customers confirmed users positive opinion of the scheme, which received an overall satisfaction rating of 8 on a scale of 10. Members especially appreciated the cars driving comfort, the self service system, the availability of cars at the recharging stations and the competency of the sales staff. All also appreciate to fight against climate change.

Concerning environmental impacts it appears that’s the results are very positive by reducing local pollution (no local air pollution) or noise. The main problem is to find new electric vehicles (vehicles availability) and reduce costs for their procurement.
The main costs of the projects concerned research activities, administration of the project, investment in infrastructure and vehicles and use and maintenance costs (300 000 €/year).