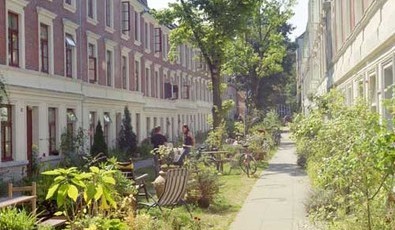 In 2003 the Baugemeinschaft LEBENS(t)RAUM Johannisthal GdR bought properties in Berlin, district Treptow, part Johannisthal and sold them to private households. The estate is designed as a multi-generational housing project. One criteria of the group for new participants is their car-freeness, but 12 parking spaces are positioned at the edge of the area. So the project can be regarded as a “car reduced” development.

In former times the site was used as an airport, today it is in large parts a protected landscape area. 120 private households built single houses (22 accommodation units) with an ecological concept and some common facilities. In the third part of the development single houses and multiple dwellings were planned, so that the project area is in all 0,4ha. The colony is located in a suburban part in the southeast of Berlin, between the Spree River and the Teltow Canal, being directly situated at the natural and landscape park Johannisthal. Public transport is reachable within 5-10 minutes walking distance and the area is connected to the city centre by some tram lines. Supply facilities, a cinema and some common facilities are easily accessible by walking. Different schools and day-care centres are close-by.

The construction of the colony started in 2003 and has been finished in 2007. To support the idea of a car free zone special mobility services are offered:

Regulatory frameworks:
Car-reduced housing is regulated under public law. In Berlin all car free households have financial advantages because the city’s building law code allows every owner of a site to decide by himself whether he or she wants to build parking spaces or not. So, in this case, car-free households can use the part of their claim e. g. for bicycles and do not need to seal it up for cars.

All properties are already sold, which shows that the idea of car-freeness is supported by the households.

The city’s building law code is the basic instrument to afford car-freeness in Berlin. It offers car-free households a financial advantage.

On great demand there is the possibility to expand the project on neighbour properties because they are reserved in agreement with the City of Berlin.

Homepage of the building project Johannisthal