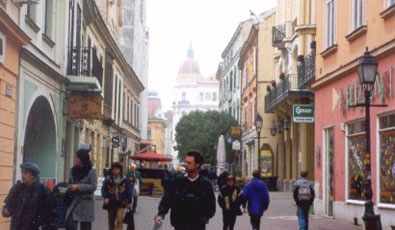 A car-free zone in the centre of Pécs around the UNESCO protected monuments accompanied by a limited access area in the buffer-zone of the city-centre and a zone-model parking system.

The objectives are to establish a car-free zone, and planning a bicycle road in the inner city and by that:

In the framework of the Trendsetter project three measures are implemented in Pecs, which are linked closely to each other, out of which this measure aims the establishment of a car-free zone. As a result of the rapidly growing number of cars during the last decade congestions became an everyday phenomenon of life in the centre of Pecs, which results in air pollution, noise pollution and a significant deterioration of living and re-creating conditions. In addition to this in 2002 the inner city of Pécs - remains from the Early Christian period - were awarded with the UNESCO Cultural World Heritage title. This significant recognition requires further preventive actions, which serves the long term sustainability of these universal cultural values.

The measure establishes a car-free zone in the city centre around the UNESCO protected sites, named World Heritage Zone. This zone is completely closed for private cars, only the local residents - who actually live here - are permitted to access this area and the relatives of physically handicapped people may apply for permission from the municipality. (Car users must approve that they use the car for the benefit of the disabled relative in each occasion for the municipal police controlling the area permanently.) It is not possible to purchase access permission based on any other reasons in this area.

The zone is established with the ordinary use of traffic tables, signs and in certain cases the roads are blocked by jet polls and other built elements. The municipal police controls access each day, the heavy penalty supports meeting the objectives. As complementary actions a 30 km/h speed limit is introduced in the whole city centre and an access limitation of freighters over 6 tons.

The car-free zone is accompanied by two other types of zones in the centre: inside the area of the medieval town wall a limited access area is introduced, which is closed for private cars without municipal access permission. (It is easier to apply - in certain cases purchase - these permissions in this area, than in the World Heritage Zone.) Around the city wall - still in the city centre - a zone-model parking system is introduced, which contribute to the municipal control over the number of cars visiting the centre of Pécs.

The measure integrates the complete process of the introduction of these zones as planning, argumentation-debate, implementation and evaluation of the actions.

The measure focuses on:

The established access restrictions will provide suitable conditions for the UNESCO World Heritage sites to be preserved for the next generations. The extension of the strolling-zone will provide impetus for the use of PT and the bicycle road will foster the use of bicycles in the centre. The flexible gates will disable access to these areas and will give further motivation for the use of PT. The measures will contribute to better living, working and recreation conditions, reduce noise-level and pollution in the central areas.

During the first 12-16 months of the project the City of Pécs has prepared a decision on the introduction of the car-free zone, the location of the car-free-zone has been planned and approved. During the debate of the proposal, all stake-holders and affected citizens/institutions agreed on the necessity of the actions.

During month 17 the car-free zone was established in the inner city centre: the municipal resolution on the introduction of the system has been approved.

By the end of the second year of the project a speed limit of 30 km/h was introduced and the access of heavy vehicles (over 6 tons) within the World Heritage Zone was prohibited. The extension of the strolling zone was also investigated and the building of new bicycle roads was postponed due to financial reasons. Several streets have been closed and access to others has been limited.

Pecs has used the easiest technology to achieve traffic reduction in the city, namely the municipality’s legal power has been utilized for limiting access, private car usage in the city centre. Based on the principles of democracy all stake-holders and affected citizens have been invited to the planning of the municipal resolution and all political powers supported the actions contributing to the improvement of the environmental and living conditions in the city-centre.

No technological innovations have been implemented, but it is not usual in Central- and Eastern Europe to imitate the access of central city areas, which could generate profit if they were used as paying parking places.

The political and administrative aspect of the action is absolutely positive. All political parties support the improvement of the living conditions in the city centre by the limitation of the private cars, in addition to this the occupancy rate of public transportation is also expected due to these actions.

The access restrictions were not introduced on the basis of the economic cost-benefit analysis of the measure, as it decreases the income of the municipality. In the long-term, the environmental impact of the actions justifies the implementation of the actions.

By 2010, it is expected and planned that the whole city-centre of Pécs will be closed for private cars and Hungary’s largest pedestrian zone will be implemented inside the medieval city walls. This requires the complete change of the bus fleet to environment friendly midi buses (at this stage it is most likely, that biogas fuelled) and the increase of the green areas in the centre (the conversion of the largest car-park into a public park has already been started).