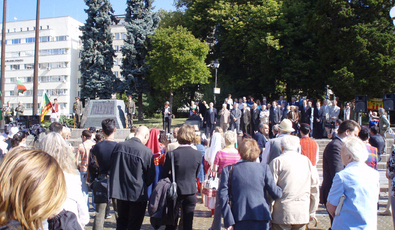 A car-free day was organized in the historical city centre of Sofia for the first time in 20 years. Many citizens did not recognize the main square, as it was transformed by the absence of the usual hundreds of parked cars and intense traffic.

The Bulgarian capital is experiencing severe traffic and urban transport management conflicts that negatively affect the quality of the environment and the well-being of citizens. Sofia has a population of nearly 1.6 million and is home to more than 800 000 cars.
This case study describes an activity undertaken by CSDCS (Club Sustainable Development for a Civil Society) in Sofia within the framework of the BENEFIT project and funded under the EU program CIP – IEE. The aim is to try to introduce mobility management principles and persuade decision-makers to adopt the European vision of city transport management. The objective of the activity was to achieve a higher degree of awareness among citizens about the negative impact of intense car traffic, and to prepare decision makers and the Sofia community for the introduction of more mobility management measures in the Bulgarian capital.

The city centre was closed to motorized traffic from 08:00 until 18:00 and all parked cars were removed. On the main square “Al. Batemberg” an open-air concert took place and there were booths where representatives of several NGOs distributed advertising materials promoting the use of public transport to pedestrians. The motto was “Less cars in the city centre”.
No obstacles were encountered in organising and conducting the event because the Municipality and the traffic police were very helpful. The only problem was that the event lasted only ten hours and the next day Sofia city centre was again full of cars.

Following the publication of information about the event in the newspapers, more than 10,000 citizens came to the main square and enjoyed the free space in the heart of the capital. More than 1,000 BENEFIT project leaflets, postcards and badges were distributed to pedestrians walking peacefully in the city centre, free of cars. As a result of the event, about 10,000 Sofia families were informed about the BENEFIT project, its goals and objectives, and CSDCS received the support of citizens for mobility management measures in Sofia city centre. The national radio, the national TV channel 1 and the private TV channels TV7, NOVA TV and BTV broadcast information about the event in the evening. Local newspapers published the results of measurements of air quality: 60% less harmful emissions were detected during the day.
The good results from this event could serve as a basis for the introduction of the enlargement of blue zones, the introduction of a congestion charge, etc.