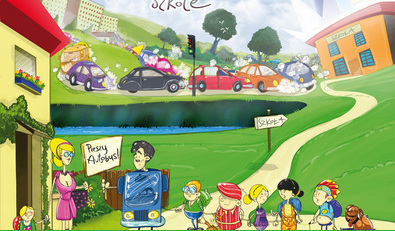 In the framework of the SEGMENT project, a 'New School Pupils’ campaign was carried out among children starting primary school and their parents in order to encourage them to reduce car use and walk more when travelling to school. The campaign contained a 'walking bus and WOW (Walk Once a Week).

In the framework of SEGMENT, the city of Gdynia in Poland developed the The ‘New School Pupils’ campaign. A survey determined three segements of parents: image-conscious intenders and dissatisfied drivers who drive children to school on the way to work and car contemplators who walk children to school but consider car driving. This case study concentrates on the campaigns created for the first two segments. The aim of this campaign was to encourage these parents to reduce car driving and walk with children to/from school, showing at the same time that the car is no longer a symbol of success, and walking is healthy and can be a good way to spend quality time with children.

The campaign for car contemplators is described in a separate case study.

As part of SEGMENT, Gdynia undertook a survey of travel behaviour of new school pupils and their parents travelling to school, and their attitudes to different modes of transport. The results allowed the designation of segments of parents with similar mobility behaviour, of which 3 segments were chosen by Gdynia as target groups: image-conscious intenders (17%), dissatisfied drivers (17%), car contemplators (13%).

Survey results allowed for identification of common characteristics of image-conscious intenders and dissatisfied drivers: i.e. they are busy and work full time, use car often - even for short distances, drive children to school, consider car as a symbol of success and as a fastest and safest mode, don’t see themselves in a bus but consider walking as an option. This identification lead to the creation of  the campaign directed specifically to these parents, aiming to make them feel successful and happy without a car and also good about themselves that they are walking their children to school.

The campaign was implemented in 11 primary schools in Gdynia, and it included:

A. Organising a “walking bus” and a promotio>campaign in 5 primary schools (Jan to Jun and Sept 2012) - information and promotion events with parents and teachers were organised, production and dissemination of promotional animated film, small safety incentives for children and parents involved in the project, “walking bus” poster campaign.

B. Organising a “Walk once a week” (WOW) campaign in 6 primary schools (Apr to Jun and Sept 2012) - poster campaign encouraging children and parents to walk to school, “Tree” posters with green stickers were for children from first classes to stick on the tree every time they walked to school, a competition was organised among the classes with awards such as safety gadgets, small incentives (i.e. flower, biscuit) were given out every week for parents who walk their children to school.

The campaign was very successful. Actions carried out within the campaign were very well matched with the characteristics of the segment targets - they highlighted the particular significance of parents spending more quality time with their child.

Results
- Evaluation results of the before-after survey showed a slight decrease in car driving and a slight increase in walking and public transport use. In the target group of 1700 people, this led to a CO2-emission reduction of about 15.5 tons.
- As in several other SEGMENT projects, the usage of the control group method for evalution showed some problems.

- Results of the before-after study can be seen by following this link to MaxEva.

Lessons learned
- Realisation of the campaign has shown that "walk once a week" campaigns require significantly less preparation. This means that this campaign is implemented more easily and involves less organisational obstacles and therefore is probably more effective (convinces more people).
- "Walking bus" has gained extensive media attention - the media has responded very positively to the idea and progress of the project.
- Control group method should only be used when it is guaranteed that the characteristics of the control group conform to the evaluation method (sample size and return rate large enough, group characteristic very similar to target group, survey timing identical).

Due to the large success of the campaign (WOW and 'walking bus' actions) it will be continued as Gdynia's local measure in Apr - Sep 2013.