Campaign to deliver goods by bike in Pamiers. France 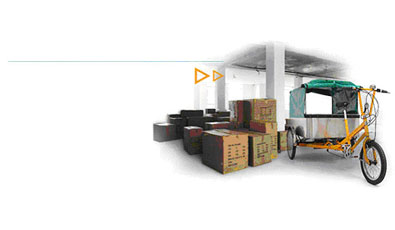 The French City of Pamiers set up a pilot delivery service of goods using tricycles. The approach was not successful due to insufficient communication of the campaign to the end users. But it was a step in the right direction as the former lack of awareness for clean and energy efficient delivery systems has been reduced.

Since 2004 the City of Pamiers has provided a bike scheme, but it was not fully used by the inhabitants. Most of them walked or use a private car for their shopping. They are not aware of the impacts of their travel on the environment, emission of greenhouse gases and pollution. Therefore it was essential to prove to the inhabitants as well as to the shopkeepers that it is possible to do shopping in a sustainable way.
Based on the consultation of the 80 shopkeepers in the centre of Pamiers, it was obvious that they were not in favour of cycle racks in front of their shops. They were afraid of losing customers. Their main concern was an economic one, they didn’t feel concerned about their environmental impact. The pilot was the first time they were asked to have an environmental approach to their activities and to think about the emissions of greenhouse gases, air pollution, health risks… There was no awareness about the fact that cyclists are also customers.

In accordance with the shopkeepers wishes, an electric bike was provided for the delivery of goods. 52 shopkeepers agreed with this proposal and were involved in the process. After long discussions, it was decided to implement the action over the Christmas period, when is huge custom in shops, for better results and impacts.
The shopkeepers taking part to the operation were trained on soft modes of travel and their impacts. Then the manager of the tricycle rent presented himself to the shopkeepers to win their trust. Posters were displayed at different sites in Pamiers and flyers were distributed to the inhabitants to inform them about the campaign with the slogan “be free, be clean, be bike “.
Then, during the 3rd week of December 2009, the customers could go shopping by bike without being preoccupied about transporting their purchases. They were delivered to their home by the electric bike. This service was free.

The pilot project failed. Of the 80 shopkeepers approached in Pamiers, 52 took part to the action.
Only 4 deliveries were realised by the electric bike. Various reasons explain this unsatisfactory result. First, the parking place of the electric bike was not well situated, the citizens didn’t see it easily. The main difficulty lies in the fact that the delivery man was unknown by the inhabitants (he lived in Toulouse and not in Pamiers) and arouse suspicion
Also, the communication tools were insufficient and inadequate for this kind of event. The training of the shopkeepers required more time.
They don’t have the environmental and sustainable considerations in mind so the training must be well argued and convincing.

Nevertheless, this campaign has at least one positive aspect: the willingness of the shopkeepers of Pamiers to renew this action in the future. It proves that the fist step of sensitisation was fruitful.