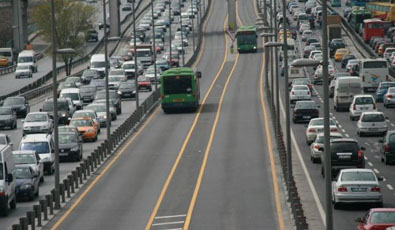 A Bus-Rapid-Transit-Line (BRT) was realized in Istanbul in 2007. It currently transports more than 500,000 passengers everyday, on a total length of 29 km. This makes the BRT-line in Istanbul one of the most frequented bus lines in the world.

With a population of more than 13 million the metropolitan area of Istanbul is one of the world’s largest metropolitan regions. The population of Istanbul has increased tenfold within the last 50 years. The transport problems associated with it are omnipresent in Istanbul. The existing transport related infrastructure can only inadequately contain the increasing traffic which causes an immense congestion problem.

In answer to the growing traffic and congestion, the City of Istanbul started to plan and implement a BRT-line in 2004. The project is supported by the World Resource Centre for Sustainable Transport (EMBARQ).Separated from the remaining traffic, the bus line is operated on a special lane and therefore is unaffected by congestion and long waiting times. The construction of the BRT-line started in 2005 and it was opened in September 2007. Originally the BRT-line ran between the districts of Avcilar in the north east of Istanbul and Topkapi in the centre, it was approx. 17 km long and had 14 stops. One year after its opening, the BRT-line was frequented by around 240,000 passengers daily. Due to high demand the line was extended to 29 km in 2008 and now operates between the districts Topkapi and Zincirlikuyu.>

Currently (March 09), everyday more than 500,000 passengers use the line. On the separate lane the average speed of the busses amounts to 40 km/h. Consequently the daily journey time is reduced from 2.5 hours to 40 minutes. One stop is frequented by 144 buses per hour. Thus, every 25 seconds a bus leaves. Hence, the waiting time at the bus stop is negligible.A bus on the BRT-line uses approximately between 0.3 and 0.4 litres of fuel for 100 km per passenger and consequently contributes hugely to the reduction of CO2 emissions.The last construction phase is due to be concluded within 2009. An additional 11 km will connect the European and Asian part of Istanbul. As a consequence passenger figures are expected to rise to 850,000. Further expansion phases are already in the pipeline.The project was nominated for the “Sustainable Transport Award” in January 2009.More information:Embarq articleGerman Pressetext