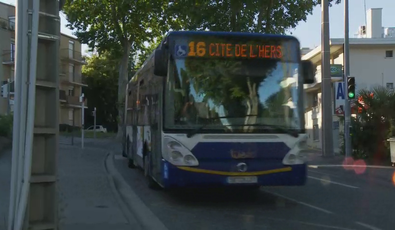 Within the CIVITAS MOBILIS project two bus lines were equipped with a priority request system in order to assess the advantages and constraints of the system for both public transport and private car flows.The radio priority system enables a permanent contact between the bus and the traffic junction. It calculates the time when the bus will arrive at the traffic junction and therefore can give green light to the arriving bus.>

Surveys in a test phase show that bus regularity and journey time improved and average bus waiting times at traffic lights was reduced by 52 percent which is in average 9 seconds per traffic light equipped.The investment of the project is around 3 Million Euros. It covers the system in the bus, the system at the junctions and the central system that permits to collect all the data to up- and download from the bus. The gain of such a system will increase the overall travel time and reduce the gasoline consumption and so the feedback should be one or two Millions in one year depending on the equipment of the whole bus fleet and the whole traffic junction of the main bus lane. That represents a return on investment after 3 or 4 years of exploitation.This ITS solution is particularly adapted to the most congested lanes. Bus Priority system permits to smartly deal with conflicts on several lanes on a same traffic junction.Nevertheless, this solution is still not fully implemented because of the difficulty to program it. Though, an interface with the AVL (Automatic Vehicle Location) and this would be possible and should be considered as an interesting perspective for the future.On the basis of the trials, Toulouse decided to equip new junctions with bus priority systems.