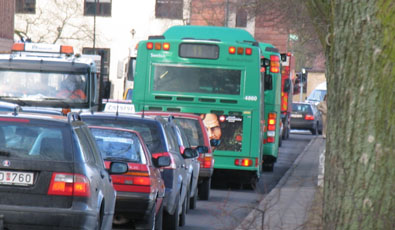 New hardware has been added to the traffic signals in over 40 intersections to communicate with the buses. The computer on the bus that manages the destination sign calls the traffic lights, asking for priority. Before CIVITAS SMILE, buses spent 11 % of their time waiting at traffic lights, this measure has improved speed and punctuality.

The measure objectives are to introduce bus priority systems at 42 traffic lights. But also to improve the attractiveness of public transport in Malmö we want to increase the intervals from 10 minutes to 7,5 minutes intervals without increase the amount of buses. And in long term reduce the use of private car among commuters in to city centre. Some innovative aspects are that the bus priority system will include all traffic lights where local and regional buses traffic.

Buses spend a large amount of time, 11%, waiting attraffic lights. Prioritized traffic lights with bus lanes couldsolve this problem. The introduction of bus prioritysystems at 42 traffic lights is included in the project.Traffic light priority systems are one of the most importantactions to increase bus accessibility and maybe theaction that can be most effective. By 2004 all city busesand some regional buses are equipped with GPS an>computers that can communicate with traffic lights, so inthis project measures are only needed to installequipment in the traffic lights in order to establish apriority system.Tasks of implementation;1. Consultants assignments2. Traffic technical planning3. Select a supplier for modem4. Installing modem5. Programming bus computers6. Programming controllers7. Running in period8. Evaluation

The system have been launched and evaluated by Lund University during 2008.

Driving times were generally shorter with bus priority turned on at the measured intersections. The average bus speed during day time increased from 15.4 to 16.1 km/h in the direction towards city centre and from 15.9 to 16.5 in the direction from city centre. The best result was reached in the afternoon peak where the average bus speed increased from 14.1 to 15.5 km/h, an improvement by nearly 10 %. There was also a positive effect on keeping the time table where the accuracy rate increased from 25 to 29 % in direction from city centre and from 23 to 25 % towards the city centre. The bus priority system also had a positive effect on the car traffic decreasing the delays at the traffic lights by some 14 %.
Topic:
Archive
Country:
Sweden
City:
Malmö
Contact:
Tommy Jensen
Author:
Tommy Jensen
Keywords: