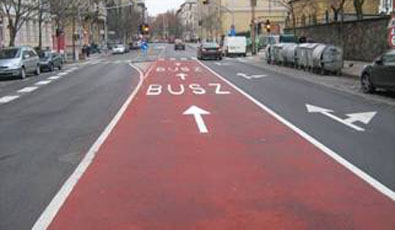 Increasing car ownership and use in Budapest has resulted in many negative environmental impacts for the city’s residents. In an attempt to address these problems and to make public transport a more attractive option the city has introduced a network of bus lanes and other bus priority measures.

This growing level of private car use has led to the following negative consequences:

The best and also the most expensive solution would be the creation of completely separated public transport network, although, the city structure of Budapest is unsuited to major new road building and other solutions had to be sought to improve the existing road network, specifically on the main routes to, via and from the city centre area. As such the city decided to implement a network of bus lanes on the roads that were large enough to separate and give priority to public transport vehicles, over other transport modes.

In Budapest the following types of bus lanes have been introduced:

Inside bus lane
The most common type of bus lane situated at the right side of the road, with the same direction of traffic.

Middle bus lane
Bus lanes are located in the middle of roads.

Public transport right of way
Lanes allowing both tram and bus vehicles usually in the centre of roads, or completely segregated from the road (on park land and verges, for example). Typically trams have greatest priority over buses on these lanes.

However, for all of the above types, many drivers simply ignored the ‘rules’ and drove on the bus lanes, which defeated the aim of allowing buses priority, and further refinements to the bus lane network were required to reduce this problem.

Coloured bus lane
In 2009 a new concept was introduced: the coloured bus lane. This solution was initially installed in only one location, although, following positive evaluations of its impact on deterring car drivers from driving in the bus lane, it is anticipated that similar schemes will be implemented in other city locations.

At the present time, bus lanes totalling 67km in length and other public transport priority measures have been introduced at 141 locations throughout the city. Except for some short sections, most of the bus lanes are situated in city centre areas.

In 2009, over 9km of new bus lanes were implemented in 19 locations, which equates to around 13-14% of the total road network. In 2010, it is anticipated that a further 3-3.5km of new bus lanes will be introduced. The introduction of the bus lane network has significantly improved traffic conditions throughout Budapest and made travelling by public transport an attractive option for its residents.