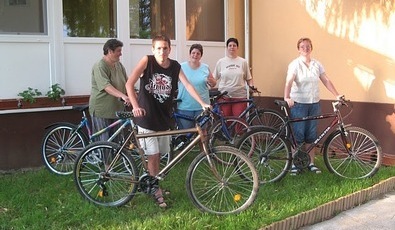 The Bicycle Kitchen (Bringkonyha) is a non-profit organisation with a two-fold mission: first, to provide a workshop where people can repair, and learn to repair, bicycles, and second, to give away fixed-up bicycles to people in need.

The spark for the idea came in 2008, when a post went up on the weblog criticalmass.hu about a girl in the Hungarian countryside who needed a bicycle to get to work. Several readers responded over the next few days, creating a large surplus of donated bicycles. A group of volunteers coalesced and struck on the idea of a workshop/bicycle charity modelled on an existing organisation in Vienna.

It would receive donated bikes, get them into working condition and donate them to people in need. The first donation of eight bicycles was given in March 2009 to a local home for people with Down's Syndrome. About 40 local cyclists took part in the presentation of the gifts.

The Bike Kitchen has since given similar donations to a local home for child cancer patients (Együtt a Daganatos Gyermekekért) and a home for disabled children (Lámpás '92 Közhasznú Alapítvány).

The Bicycle Kitchen is not merely non-profit -- it is practically non-funded. With no paid staff, it relies entirely on volunteers for its operations and various in-kind donations for its material needs.

Its first working space was offered free of charge on the premises of a local "ruin pub" whose owner was a friend of an organiser. When that space was no longer available, the owner of a similar, nearby venue offered an attic space.

To date, the Bike Kitchen's largest single cash donation has been EUR 2,000. Other cash assistance comes via a donation jar in the work space and through collections at occasional fund-raising barbecues. The Bike Kitchen has a cargo bike, built from scrap by volunteers, that it lends out as a carbon-free freight vehicle for small donations.

Although the Bike Kitchen's tools and work space are meant to be open to anyone interested in fixing bikes, it has always been difficult to organise open days to put the facilities to use. Concerning bike-repair training, organisers have managed to organise just one so far due to the difficulty in finding volunteer trainers and other staff.

Running on a shoestring budget and out of makeshift attic accommodation, the Bike Kitchen works on a catch-as-catch-can basis. Even so, it has given away several dozen bicycles over the last four years, including to children in local institutions and also to very poor individuals, according to organiser Orsolya Liptay.

The single bike-repair training event was quite popular, having dispensed knowledge and skills to more than 20 participants.

One of the initiative's biggest successes was only indirectly related to bicycles. After the Bike Kitchen made a donation to the disabled children of the Lámpás '92 home, some cycling-enthusiast employees of MOL, the Hungarian petrol company, contacted the home to see what they could do. They ended up making an arrangement in which handicrafts produced by residents of the home could be sold at MOL convenience shops.