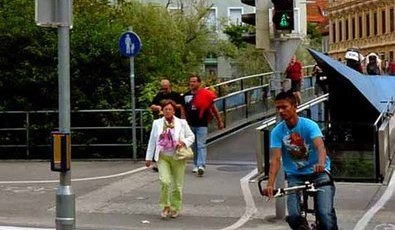 To reduce waiting times for cyclists and pedestrians, the city of Graz has renewed and updated its system of pelican crossings (traffic light controlled crossings). At one crossing in the centre of Graz, traffic lights turn green when sensors detect movements of cars and non-pedestrians or cyclists.

Commonly, pelican crossings are controlled by signals operated by pedestrians. People who want to cross push the control button to activate the traffic signals, wait until the lights turn green and finally cross the street. The problem of long waiting times at pelican crossings is well known. Pedestrians usually wait up to 100 seconds for a green signal, meaning the likelihood of them crossing against the signal is statistically significant. Pedestrians therefore run the risk of putting themselves in danger. Another inconvenience is forcing drivers to stop for red traffic lights once the pedestrians have already crossed.

A solution to this issue has been developed up in Graz, where a new type of pelican crossing was implemented in autumn 2008. The city chose the pedestrian crossing near the Edeggersteg for the test model because the number of people crossing there is significantly higher than on many other roads due its close proximity to the city centre. The innovative traffic light system was launched by the Deputy Mayor of Graz, Lisa Rücker, and the city’s traffic signals expert Winfried Höpfl during European Mobility Week. At the launch, Deputy Mayor Rücker - underlining the importance of the new system - said: 'We want to improve the situation for pedestrians, cyclists and public transport with respect to the city’s system of traffic signals.'

The new traffic signal control follows a simple pattern of operation. Commonly, pelican crossings are signal-controlled crossings operated by pedestrians. In Graz, however, the light remains green for cyclists and pedestrians. Only if cars cross an inductive loop embedded under the road surface 100m before the crossing, do the traffic lights change in favour of the car. If the car approaches at a constant speed of 40 km/h, the driver does not even have to stop before the traffic light changes. Because of a higher circulation of traffic on working days, there is a fixed cycle-time of 40 seconds on these days. This means that pedestrians need only wait up to 28 seconds until they can cross, a much shorter wait than previously. Nevertheless, the flow of traffic is not disturbed and major traffic jams are prevented.

Even though the results showed no measurable negative impact on traffic conditions and vehicle-flow, resistance and complaints from motorists persisted. As a result the system was retired due to political request. Nevertheless the results will be incorporated into further projects investigating dynamic and intelligent signal timing.