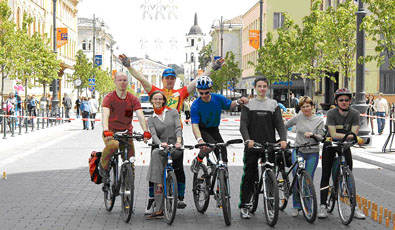 A decision was made to mount campaigns in an attempt to influence travel behaviour in Vilnius.

Campaign 1: By means of a questionnaire, to estimate the popularity of clean urban transport (bicycles) in the Lazdynai districtof Vilnius
During the first stage of this project a comprehensive questionnaire - “To school by bike“ was developed, and distributed to schoolchildren and their parents.
The main objective of this campaign was to change the attitudes of the target group (10 - 20 year old schoolchildren from 5 secondary schools), to encourage them to use bicycles. The residential district of Lazdynai was selected because new cycle routes and cycle parking sites are planned to be built near schools in this district.

Campaign 2: To propagate and popularize biotransport, energy - efficient, healthy and mobile life style
Bicycle-related events were organized both before and after the survey.
The action My Family, My Bike and Me was a public event in Vilnius. It was designed to promote non-motorised transport, and to encourage a more healthy way of life. The broad target groups for the campaign were cyclists, school pupils and various city clubs.
The aim was to change the attitude of the city inhabitants towards bicycles. The organizer, Vilnius Healthy City Bureau, looked for partners in central and local government, and amongst decision makers. The event was organized in co-operation with city local government departments, and campaign participants; it also included the preparation and production of various posters and fliers.

After various mobility campaigns and events, children’s travel to school have been changed for the better. According to the data of the 2004 sociological survey:
The proportion of home - school - home trips made on foot increased from 54.8 % to 60.2 %;
The proportion of trips home - school - home trips made by bicycle increased from 0.3 % to 0.8. More families now own a bicycle: in 40,5 % of respondents’ households there was at least one bike in 2003, but by 2004 this increased to 42,7 %.
There are now more pupils who have their own bicycle. In less than one year this proportion increased from 69.1 % to 79.2 % of the population.