Biking tours for the blind (Budapest) 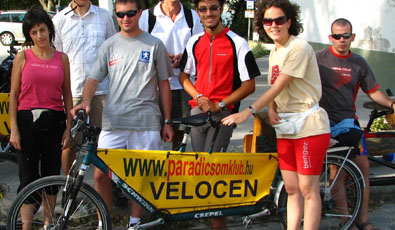 Most blind people are physically healthy - yet the majority of them has rather constrained fitness due to the lack of physical movement. Partly this is caused by their particular disability and partly because of the generally still weak integration into society - especially in Eastern Europe. In recognition of this situation a Hungarian NGO called “Tomato Club” is organizing biking tours for the blind.

It is often difficult to get blind people out of their homes and “make them move”. Apart from slow-speed walking, most blind people do little physical exercise. Due to their lack of vision most sports are unsuitable for them - but not all! Even blind people are sometimes reluctant to acknowledge this - until they have some positive experience.One must also recognize that in spite of recent improvements in accessibility, the social integration of blind and people with limited vision are still far from ideal. It is rather the exception than the rule to consider their specific needs. This is especially true in Eastern European countries, where people with disabilities were traditionally kept in isolation from mainstream society. Recognising this situation a Hungarian NGO is organizing a wide range of outdoor activities for the blind - one of them being biking.

The NGO “Tomato Club” started to offer free-time programmes for the blind and people with deteriorated vision in 1999. It grew out of a group of friends that had been hiking together for years before. The Club’s activities are open to everyone - with or without disabilities. The aim of the association is not only to improve the quality of life of blind people but also to reduce prejudice against them by offering an opportunity to everyone to socialize with them.The biking tours are implemented by tandem bicycles. The club has currently 10-12 tandems.>As they are difficult to obtain in shops and are very expensive (a tandem bike costs well over 2000 EUR) they were made locally - to a large part by the club members themselves. Apart from cost saving (one must also consider higher transportation and spare-part costs) this also allowed making specially configured bikes, such as for people with different size. In each tour about 10-20 participants take place. Half of them are blind. A biking season lasts for 6 months and there is a tour every two weeks. Most participants are returning participants. In 2008 a tandem tour was organized alongside the Vienna-Budapest marathon. The runners are often accompanied by bikers on the way - this time it was also a team of 10 tandem riders (10 with vision, 10 blind).The majority of costs are covered through project grants. Participants do have to pay some participation fee - but these are rather nominal, with the main purpose being psychological than cost-recovery.During ten years of activities the Tomato Club has offered programmes to hundreds of blind and non-blind people. It has built good cooperation with other organisations, such as the Society of Blinds and People with Deteriorated Vision, the society “See!” or the National Association of the Physically Disabled. They also have very good cooperation with foreign partners, most importantly in Slovakia.

The now decade-long activities of the Tomato Club have harvested a range of benefits, both for people with disabilities as well as the general society. Based on the success of the tandem tours now they offer a range of other activities: sailing, horse riding, hiking and musical events. In the winter season they organize museum visits - which are not easy to prepare, as most museums definitely do not want visitors to touch their objects…
Topic:
Walking and cycling
Archive
Country:
Hungary
City:
Budapest
Contact:
Miklós Árpásy
Author:
Gabor Heves
Keywords: