BikeLine – Cycling in groups to school in Kaindorf. Austria 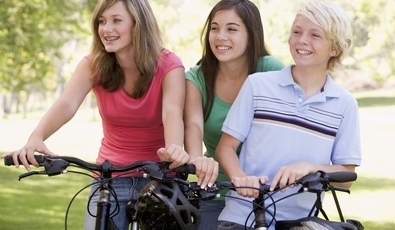 In 2010 Kaindorf, a small municipality in eastern Austria, initiated a project called BikeLine. Children were encouraged to meet at designated stops at scheduled times and cycle together along selected routes to school.

Children are often brought to school by their parents, even though they live in close proximity to the educational institution. To reduce this number and encourage students to cycle to school, the municipality of Kaindorf initiated a project called “BikeLine”.
Cycling to school is not only fun and helps strengthen social cohesion, it also benefits health and environment and reduces car traffic in the morning. The aim of the project is to promote the bicycle as a relevant alternative to the car and as a daily mode of transport.

In spring 2010, the homes of all students of the local school were marked on a map. Stops were set up at different locations, where students could meet in the morning; meeting times depend on the distance to the school. On the 21st of May 2010, the project officially started and the first cyclists met at the stops. Even the local mayors were present that day, to cycle along with the children.

Participation was on a voluntary basis. The amount of kilometres covered was recorded using a chip on each child’s helmet and a terminal set up at school.>This allowed the organisers to include funny games with spot prizes in the daily routine. At the end of the school year, the cyclists were rewarded in three categories (for both males and females): the one with the most kilometres of distance cycled, the one with the most metres of altitude cycled and the one who cycled on most official BikeLine days. The winners of each category were immortalised on the street of fame and awarded the bikebird award.

In 2011 the BikeLine project was relaunched. Between the 2nd of May and 24th of June, students of participating schools could cycle in a virtual journey around the world. The game, called “We bike the world”, was divided into 8 stages, each lasting a week. Throughout each week and at the end of the game, fantastic prices were given away.

In 2010 only the local school in Kaindorf participated. Already in 2011 however, 11 schools from two provinces have introduced the BikeLine, encompassing around 600 students. In two months they cycled 40,000 kilometres and 270,000 altitude metres. Even after the official end of the BikeLine, students continued to cycle to school, clearly showing the success of the project. In 2012, it may also be implemented in other Austrian provinces.
BikeLine was nominated in 2010 for the environmental protection prize.