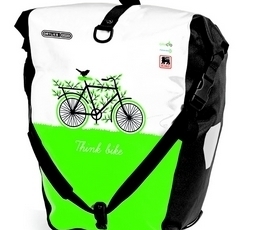 One of Belgium’s largest supermarket chains (Delhaize), in partnership with Belgium's main cycle groups launched a 3-year national campaign to entice more people to use bicycles for shopping trips in 2012.

The supermarket chain, Delhaize, who have 800 supermarkets in Belgium, wants to see more people coming to their stores by bike. They are a major international company and have another 2,000 shops across six countries and three continents.

To kick-start their Belgian campaign in September 2012, Delhaize announced they are offering high quality Ortlieb bike bags in its shops at a discount price. 1,600 bags were ordered.

The bags themselves are actually part of a bigger bicycle/retailer synergy. This is clear from information received from GRACQ & Fietsersbond. “It’s foreseen that this collaboration will be a long-term one,” explains Eric Nicolas, GRACQ’s secretary General. Other initiatives will take place in Spring, 2013 in order to highlight the numerous advantages of cycling (to the shops).

One of the big changes is that Delhaize plans to introduce is to install/ or upgrade new cycle parking facilities, based on cyclist's advice & recommendations. 15 Delhaize shops will see new cycle parking in 2012, and many more are planned in future years. The main focus is on quality cycle parking, as this will be an important upgrade for cyclists, as poor quality bicycle parking discourages people from cycling.

In its bid to be more bicycle friendly, Delhaize is offering 500 bikes and e-bikes to employees and the company also offers employees who cycle to work a cash incentive. In Belgium this payment is tax free up to 21 eurocents per kilometre.

The planning process took at least two years before the launch. The company initiated a paid consultation with the bicycle user group, and used the results to help inform the campaign.

Whilst the campaign has just begun, the planned upgrade to cycle parking has already been implemented at 15 shops. The Ortlieb bags sold out in a matter days, suggesting that there is considerable demand for more people to cycle for shopping trips than anticipated. The company aims to report more detailed results in 2013.