Bike sharing system in the city of Nafplion. Greece 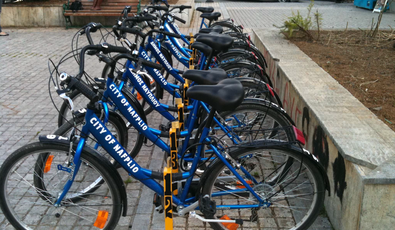 In order to decrease the use of cars and increase the use of sustainable transport modes, a bike sharing system was implemented in the city of Nafplion in 2010. The key partners involved were the local authorities and the provider of the bike sharing system. Currently, one station is located in the Trion Navarxon square in front of the Municipality.

Many tourists and local residents travel to the centre of the city of Nafplion using their cars creating severe congestion. To address this issue one of the objectives of this measure was to give tourists the opportunity to explore the city by cycling. Local residents can also benefit from using bikes as traffic congestion is decreased and their health is improved. The decision for the implementation of the system was taken by the Municipality who also ensured the funding. The system was implemented by a private company.

The city's only bike renting station is located in front of the Municipality, from where visitors and local residents can borrow a bike by paying a small amount. Given that no other station is available, bikes have to be returned at the same point. The Municipality made a public tender for the implementation of the bike renting sharing system.

The contract was awarded to the company with the most profitable offer, who undertook the responsibility to implement the system.The same company is responsible for its maintenance under the supervision of the Municipality. No obstacles or problems occured during the implementation and/or operation of the system.The cost for the maintenance of the system is covered by the revenue generated via the bike rentals.

One of the lessons learned is that bike sharing systems comprise a very efficient solution for the protection of the environment and the decrease of traffic congestion, especially in tourist areas. Moreover, the bike sharing stations should be strategically placed so as to be easily reachable by all interested parties. For the future, the installation of more stations and acquisition of more bikes is planned.

This cast study has been collected within the STARTER project.